I did a three-day, two-night tour of Halong Bay, Bai Tu Long Bay, and Lan Ha Bay. On the first morning of the tour, we took a 3.5-hour bus ride from Hanoi to the port of Halong City. Our tour guide Bobby used this as an opportunity to teach us about Vietnamese language. He told us the proper way to pronounce some Vietnamese names such as Bich Nguy and Phuc Long. Vietnamese is a tonal language, so it’s easy to get things wrong if you pronounce words phonetically without paying attention to pitch. If you aren’t careful, “thank you” in Vietnamese sounds a lot like “shut up.”

After we arrived at the port, we cruised past Halong Bay and went straight toward Bai Tu Long Bay, which was significantly less crowded. There were some wispy clouds in the sky, which served as an ideal backdrop for the limestone karsts.

After a couple of hours, our boat stopped, and we kayaked through a small tunnel to enter a lagoon that was home to about 50 monkeys. We spotted one, but we were clearly more interested in it than it was in us.

Kayaking through the Hang Guon tunnel

For our last stop of the day, we visited the “Surprising Cave” right before it closed. The cave was illuminated with colored lights, and a few rock formations resembled monkeys, turtles, and other animals.

The Surprising Cave, or A Study in Alice’s Attempts to Learn How to Use a Go Pro

The view from Ti Top

We then cruised through Lan Ha Bay, which was serene compared to the activity at Ti Top.

We went to Viet Hai, a rural commune, and took a quick bike ride before hiking through the hills. At one point, we walked through a cave, where we were able to spot bats in the darkness. 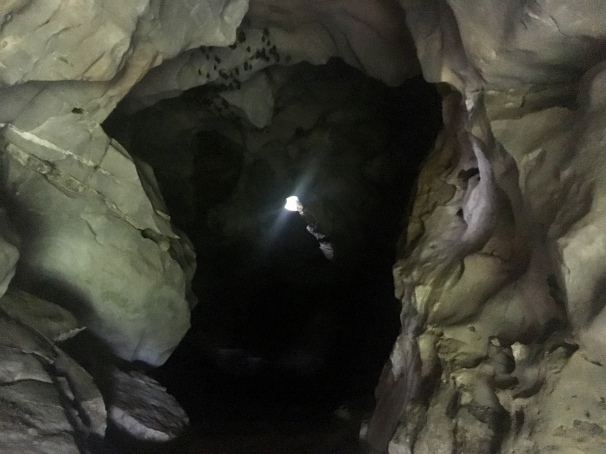 The Bat Cave – literally. The bats are the black blotches toward the top center of the photo.

After climbing and easing our way through the hills, we biked to a house that made snake wine. There’s a myth that snake wine/liquor boosts virility, so most of the men – and some women – in our group took shots. I’d had snake whiskey in Laos a few years earlier, so I abstained this time.

The house also had a litter of young puppies, and I was sorely tempted to take one.

We ended the day by kayaking to a secluded lagoon. 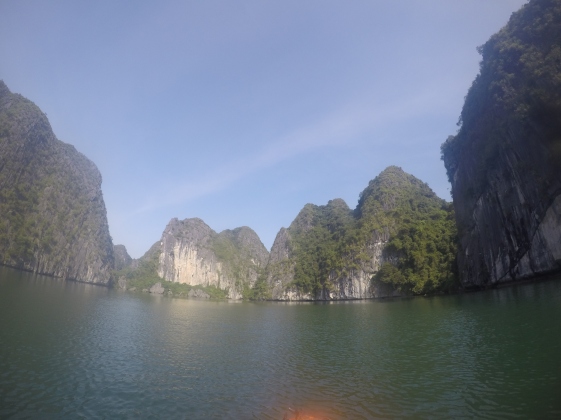 The last day was spent cruising through Lan Ha and Halong. Since we followed a different itinerary than most cruises, we were able to see the karsts without other boats getting in the way.

My Halong Bay cruise was absolutely worth the time and money. I booked the tour with Vega Travel, and they did a fantastic job avoiding other boats and groups when possible. They cap their cruises at 16 people (some cruises have 30 or more people), so the smaller group makes the cruise feel more personalized. Bobby was a stellar guide who was able to mix humorous stories with facts about the sights we were seeing. Vega offers a one-night tour that covers Halong and Bai Tu Long Bays, but I’m glad I had time for the two-night tour, which includes Lan Ha Bay. I thought Lan Ha was more scenic than many parts of Halong Bay, and it would have been a shame to miss it.