Since many foreigners visit both Hue and Hoi An, they’re faced with the question of how to travel between the two cities. If you want to do the trip quickly, you can take a 3-hour drive on the highway. A lot of travelers opt for a more scenic coastal trip, which includes a drive down the Hai Van Pass. The Hai Van Pass was featured on the UK TV show Top Gear, and travelers and tour companies frequently cite “that road from Top Gear.” I had never seen Top Gear before traveling in Vietnam, but I knew I wanted to do the scenic drive.

I chose to go from Hue to Hoi An via motorbike with Hieu, the same driver who led my tour of the DMZ. After he picked me up from my hotel in Hue, we stopped at Elephant Springs, a popular swimming spot for locals and tourists. It was overcast on the day we visited, so the springs were almost deserted. Hieu said business owners were concerned about the upcoming summer since May had been cool so far, leading to fewer visitors. I made Hieu nervous by standing too close to a rougher part of the springs. He warned me that some parts were dangerous and slippery. 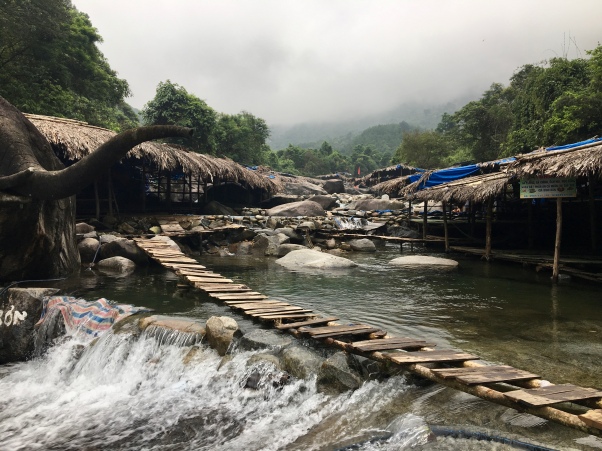 After a couple more stops, we made it to the beginning of the Hai Van Pass. Hieu offered to take a photo of me on the motorbike.

I loved being on the back of a motorbike. There’s a constant breeze as you drive, so this was one of the few times when I wasn’t sweating in Vietnam. We passed by goats that didn’t seem to notice the motorbikes and trucks zooming by them. [NB: If you get motion sickness easily, I don’t recommend watching the videos in this post.]

The sky was still overcast, so visibility became more limited as we drove up the pass. Although the drive was supposed to be scenic, everything was obscured by mist. As we approached the top of the pass, we started driving through clouds. Trucks and motorbikes appeared out of nowhere. I have no idea how Hieu managed to stay on the road, but he was very careful and didn’t overtake other vehicles.

Hieu asked me if I wanted to stop at the top of the pass, and I agreed. I couldn’t see the landscapes, but I was able to walk by a war bunker. No one else was around the bunker, and the clouds provided a spooky atmosphere.

After driving for a few more minutes, we emerged from the clouds and were able to see the coastline below. 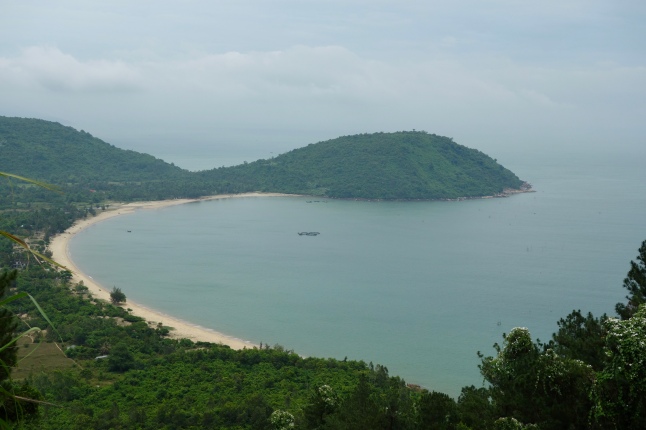 Once we completed our drive on the pass, we continued through the beach city of Danang before reaching Hoi An. Hieu dropped me off right in front of my hostel.

Although my trip on the Hai Van Pass wasn’t as scenic as the footage from Top Gear, I’m glad I chose to do it by motorbike.It was awesome to drive through the clouds, and I felt safe on the back of Hieu’s bike. Hieu was just as careful and considerate as he was on my DMZ tour. A motorbike beats a bus or train, hands down.