I spent about a week and a half in Sabah, a Malaysian state in Borneo. My stay in Borneo started in Kota Kinabalu, or “KK,” the capital city of Sabah. Kota Kinabalu isn’t a pretty city, but it was perfectly safe. A couple of malls and plenty of food options were within walking distance of my hostel. My favorite restaurant was Kedai Kopi Yee Fung, which sold laksa, a slightly sour noodle soup with coconut milk. Since I can’t resist noodles, I automatically loved this dish.

As the proud new owner of an open water certificate, I did three fun dives with Downbelow. Downbelow’s dive shop was on Manukan Island, which was a ten-minute boat ride from KK. I didn’t bring a camera since I figured I’d be busy focusing on my breathing and staying buoyant. This was a good call as I was still pretty flail-y (sure, I can invent words) on our first dive. Once I got my bearings, I was able to admire the reefs and fish. We saw an adorable puffer fish, a huge school of barracuda, and a few rays. I met another traveler who didn’t care for the diving around KK, but I enjoyed it. What can I say? I’m an easily impressed novice.

Downbelow was top-notch. The fun dives with Downbelow weren’t as cheap as those on the Perhentian Islands, but their gear was spotless and well maintained. Their shop on Manukan Island contained a pool, which we were free to use during breaks between dives. Two cats – a mother and her daughter – acted as the mascots for the shop. I usually avoid cats since I’m allergic to them, but these two cats were playful and social. If all cats were like them, I could be persuaded to become a cat person.

On another day, I went on a whitewater rafting trip with Riverbug. I’d been rafting a couple of times before, so I was eager to do it in Borneo. The rafting was on the Padas River, which contains Class III and IV rapids. Riverbug arranged the transport from KK to the rafting site, which consisted of a two-hour van ride and a two-hour train ride.

Once I arrived at the Padas River, I joined a delightful Malaysian family on our raft. The first 45 minutes of the rafting were uneventful, and we merrily bounced along the rapids. 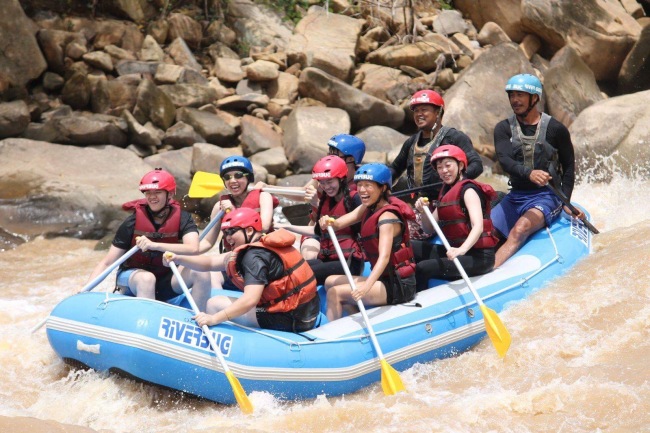 We also jumped into the river to do some “body rafting.” Our guides told us to keep our feet up and ahead of us while body rafting, which was the same position we needed to take if we fell off the raft.

After taking a short break, we returned to the river for the second half, where the rapids were noticeably rougher. As we rowed through our first rapid, four members of our crew fell off the raft. I toppled toward the center of the raft but stayed on board. Our guides safely steered the raft and picked up each fallen crew member. Our drenched comrades were great sports and had a blast while floating in the river.

We had a couple of other close calls, but everyone survived the rest of the rafting. Of course, we had to take a celebratory photo. 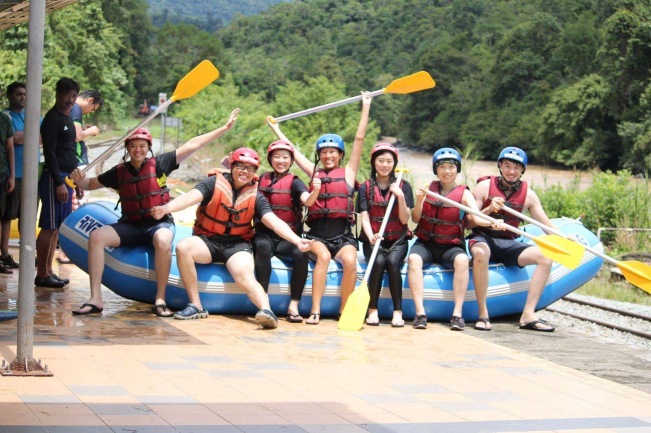 I visited KK twice. I spent a few days in KK at the beginning of my stay in Borneo and spent another night there before flying back to Kuala Lumpur. I have to give a shoutout to both of the hostels I stayed in.

I stayed at B&B@21 for the majority of my time in KK. The staff was very helpful and friendly. It was easy to pass the time by chatting with them in the common area. They even hung out with us after hours, entertaining us with card games and karaoke. If I worked at a hostel, I probably would want to peace out ASAP to escape from needy guests, so this really made an impression. The hostel was quiet overall, but it was easy to find other travelers to hang out with.

I stayed at Faloe Hostel for one night at the end of my stay in Borneo, which was one of the best hostels I’ve stayed in so far. Sarah and Ryan, the owners, were so kind and promptly answered my emails when I had a couple of questions before arriving at the hostel. My room and the common area were pristine and modern. I had to leave the hostel at 3:30 AM to catch my flight to KL, and Sarah and Ryan made sure breakfast was available for me in the kitchen.

All these factors would have been enough to put Faloe toward the top of my ranking of hostels, but here was the biggest selling point: the common area contained a washer and dryer, which were free(!!!) for guests to use. In New York, I thought an in-unit washer and dryer was the biggest and hardest-to-attain luxury. Laundry has continued to be a major deal during my travels in Southeast Asia, considering my limited wardrobe and constant sweatiness. Getting fresh laundry back is one of my favorite moments while traveling (showering is the other). I don’t care how weird this is: I will rhapsodize about hostels with free laundry.

After KK, I took a bus to Sandakan, a city in northeastern Sabah. One of the staff members at B&B@21 didn’t think it was worth staying in Sandakan and recommended nearby Sepilok instead. Sepilok is home to a number of wildlife attractions, including an orangutan rehabilitation center and sun bear conservation center. I did follow the staff member’s advice and stayed in Sepilok later. I admit that Sandakan wasn’t the most appealing city, but I had a couple of reasons for staying there.

The first reason was the Sandakan Memorial Park, which commemorates the WWII POWs who were forced to march 150 miles from Sandakan to the city of Ranau. More than 2,000 Australian and British POWs perished during these death marches. Only six POWs survived. The park contained an exhibit that detailed the POWs’ living conditions in Sandakan and the brutal nature of the marches. WWII history isn’t my forte, so the memorial was eye-opening.

Selingan, or “Turtle Island,” was the other reason why I wanted to visit Sandakan. Turtles lay eggs on the island year-round. A limited number of tourists are permitted to stay on the island each night to watch the nesting process. Sandakan serves as the main transport hub to Turtle Island, which is about an hour away from the city.

A number of companies advertise tours to Turtle Island, but all tours are ultimately booked through a Sandakan-based company called Crystal Quest. I wanted to try to book with Crystal Quest directly to avoid the jacked-up pricing by third parties. Based on my Internet searches, Crystal Quest didn’t seem to have a reliable phone number or email address, so I went straight to their office on my first morning in Sandakan. Even though it was the high season in Borneo, there was an opening for the following day. I paid 504.60 MYR (approximately $118), which covered accommodation for one night, food (lunch, dinner, and breakfast), entrance fees, and a photography fee. Third-party companies offer this tour for as much as double the price.

The following morning was rainy. I joined about 30 other guests on the boat ride to Turtle Island. Upon arrival, we checked into our rooms and had lunch. We were free to swim until 5:00 PM and walk around the island until 6:00 PM. On clear days, snorkeling is a popular activity, and gear is available for rent. Unfortunately, the rain continued for the rest of the day. A few determined guests snorkeled in the rain, but I decided to stick to land and walk around the island.

To allow turtles to remain undisturbed as they find nesting spots, guests are not allowed to walk on the beach after 6:00 PM. There were several other rules we had to follow:

At 7:00 PM, we watched a movie about turtles’ life cycles and conservation efforts on Turtle Island. At 7:30 PM, we had dinner and waited until we got the signal from a ranger to head to the beach. We got the signal at around 8:45 PM and dashed outside. We saw a turtle laying eggs, with a spotlight focused on the nest. Once the mother was finished, the ranger informed us that she laid 76 eggs.

The ranger collected the eggs and then shone a light on the mother for photos. At the time, I was caught up in the excitement and snapped away with my camera. When I reflected on this later in the night, after the buzz had died down, I felt guilty. It felt wrong to disturb the mother for a photo opp, especially since we had been told about how sensitive mother turtles are to light. When I sent photos to my dad, he called me out on disrupting the mother during the stressful nesting process. As always, Dr. Choo was right.

For the sake of honesty, I’ll show one photo I took of the mother. 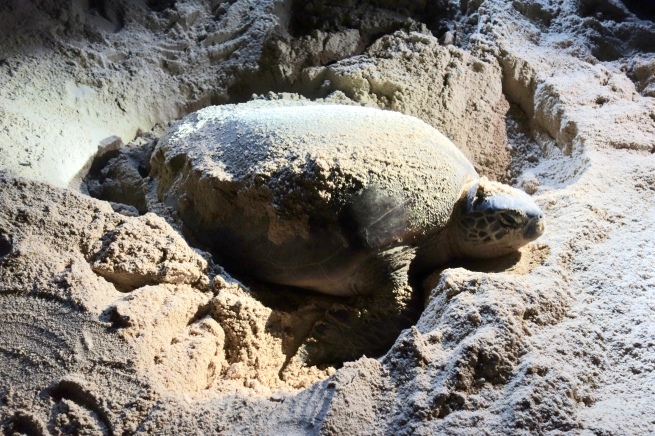 This photo reeks of guilt.

We also watched a ranger release a group of 72 hatchlings into the ocean. The ranger shone a light on the crate that the hatchlings were in for photos. Again, I later felt guilty about taking advantage of this photo opp.

After hatchlings scurried into the water, we retired to our rooms. We took a boat back to Sandakan the following morning to leave the island free for the next group of visitors.

I’m not a wildlife expert, so I’m not qualified to provide conservation tips. I’m sure visitors are a major source of funds for Turtle Island, so it’s tricky to balance guests’ interests with conservation efforts. It does seem like Turtle Island does its best to minimize disturbances to the turtles, but I still feel uncomfortable about my visit. None of the other guests I spoke to expressed reservations, so I don’t know if my guilt is unfounded or if my doubts have some basis. I’m not sure if there would be value in a no-photography policy: this could allow guests to observe the nesting and release processes, but lights wouldn’t be needed for photos.

I’m in no position to judge other travelers who might want to visit and take photos on Turtle Island. If you’re interested in visiting, it’s unquestionably a great way to get close to a mother turtle and hatchlings. Accommodations and food are basic, but you’re not paying for glamorous digs; you’re paying for the privilege of observing an amazing process.

More animals – and mixed feelings – will be featured in my next post on Borneo. Coming soon.