I visited four areas in Bali during a week and a half. I’ll focus on Seminyak and Ubud in this post and will talk about Sanur and Canggu in my next one.

Before visiting Bali, I was most familiar with Kuta, one of the more famous/notorious areas. It’s known for its nightlife and has a reputation for being a playground for Australians. Other travelers recommended skipping Kuta, as bag snatching is a serious problem there. Seminyak is supposed to be an alternative to Kuta since it’s a little safer but still offers nightlife.

Seminyak has a beach, but I didn’t go there as I heard it wasn’t particularly scenic. Instead, I took a day trip to Nusa Penida, an island southeast of Bali. After a 45-minute boat ride from Bali, my guide Wayan picked me up on his motorbike in Nusa Penida. Many of the roads in Nusa Penida are unpaved, so I maintained an iron grip on Wayan’s bike as he wound through the island. I normally love being on the back of a motorbike, but going downhill on pothole-riddled, gravel roads was uncomfortable and slightly terrifying.

We survived the ride to Angel Billabong, our first destination. The cliffs and water were beautiful and reminded me of Big Sur in California.

Wayan bought a bag of fresh banana fritters from a vendor, and we snacked on them during the brief walk to Broken Beach. (These fritters deserve an extra shoutout. I’m still drooling over them more than a month later.) Wayan spotted a turtle in the water, but it quickly swam away before I could take a photo. Even though I missed the turtle, I couldn’t complain about the views. 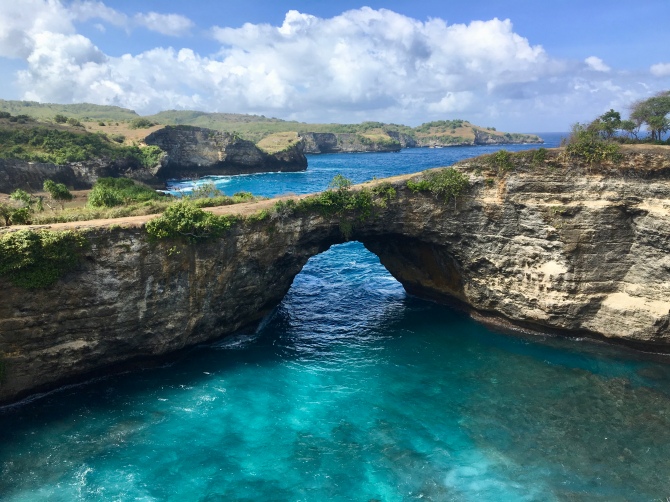 Our next stop was a viewpoint overlooking Kelingking Beach. 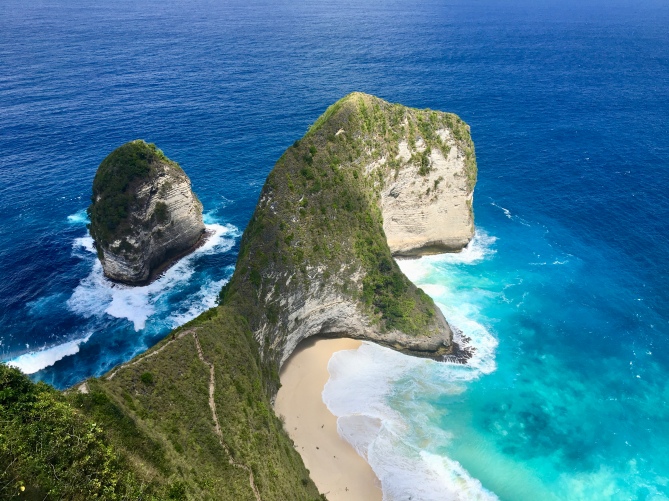 We ended the day at Crystal Bay, where I massaged my knees. While I was content, my knees were displeased with the bumpy motorbike rides.

It’s definitely worth taking a trip to Nusa Penida if you’re in Bali. Accommodations are available on the island, but they’re limited and basic. Nusa Penida doesn’t have the modern amenities that southern Bali offers…yet. That said, trading some comforts for spectacular views seems like a pretty good deal. The island is large, so a motorbike is necessary to get around.

Diving and snorkeling are popular activities around Nusa Penida and neighboring Nusa Lembongan. Unfortunately, I didn’t do either, but I met a couple of travelers who loved the diving in the area. The reefs are supposed to be beautiful, and it’s common to see manta rays.

Seminyak isn’t the most charming place, but it suited my needs. I didn’t do much besides eat a mix of local and western food (my first sandwich and salad in what felt like forever!) and walk around town. Touts staked out the main streets and hawked motorbike rentals and taxis.

At night, travelers and locals flock to a large club called La Favela. The music was excellent, with a mix of R&B and throwback pop. While you can easily get away with backpacker attire, many people dressed to impress. I’m always sweating in Southeast Asia, so I was amazed by the women who flawlessly applied full makeup without having it melt in the heat – they have magical powers. I went to La Favela during a weekend, so there was a good crowd, but it didn’t feel overly packed.

I was also familiar with Ubud before visiting Bali. I can blame Eat, Pray, Love (the movie; for better or worse, I’ve never read the book) for any preconceived notions I might have had about Ubud.

Ubud is promoted as Bali’s cultural center, so I expected a tranquil retreat from southern Bali. That illusion was shattered when I walked down the main roads and was constantly hounded by taxi touts. Central Ubud also contains many restaurants and shops, and I admit that I was happy to have more salads and western food, which I was sorely missing at this point. For some reason, Ubud has a ton of “Polo” stores, which seem to be knock-offs of Polo Ralph Lauren. It was impossible to walk down the main road without seeing at least five of these stores.

I did a countryside bike tour with Jegeg Cycling, which was hands-down my favorite activity in Ubud. Jegeg is a family-run operation, with ten out of 26 family members working for the business. Putu, a cousin of the owner of Jegeg, was my good-humored and incredibly informative guide. He was able to entertain our group while also teaching us about Bali’s history and traditions.

Putu described Balinese naming conventions, noting that Wayan and Gedeg are common names for a first-born son. Putu told us that his name is usually given to a first-born daughter. Putu explained that his mom – who sounded like a character – really wanted a daughter and insisted on keeping the name when her first child ended up being a son.

We first drove to the Tegalalang rice terraces. It was raining, but we could still appreciate the scenery.

We then visited Satria Coffee Plantation, which produces luwak coffee. The coffee is made with the help of civets, weasel-like animals that ingest coffee beans and then pass them. The beans are washed and ground to produce an expensive cup of coffee. I had no interest in trying luwak coffee since I thought it was nothing more than a gimmick. Nonetheless, I enjoyed the tea and non-luwak coffee samples that we were given.

Putu provided insight into the small basket offerings that lined the sidewalks and roads in Bali. The offerings reflect Bali’s predominantly Hindu population, and the colors represent different gods and values.

We drove to a spot with a view of Mount Batur, an active volcano. Many travelers hike up Mount Batur, but I decided to save my energy for another Indonesian volcano. (Much more on that in this post.)

Finally, we reached the cycling portion of the tour. We were each equipped with a bike and helmet. Putu led our group, while another staff member (sadly, I didn’t catch his name) trailed behind us to take care of any potential issues. I couldn’t stop staring at the staff member because he looked like an Indonesian mix of James Franco and Joseph Gordon-Levitt. I’m sure he thought I was a creep (I was).

The cycling was easy, and we biked by a number of rice fields for a couple of hours. Putu described the harvesting process and noted that many of the rice workers were elderly women. It was amazing to watch them perform this tough work.

Once we finished cycling, we went to Putu’s cousin’s family compound and were treated to a Balinese feast. This was among the best food I had in Indonesia. Everyone in our group had seconds.

The Campuhan Ridge Walk was another worthwhile activity in Ubud. The trail is connected to one of the main roads and is an easy two-kilometer walk. It wasn’t the most stunning scenery I’d seen in my travels, but it was nice to escape from the buzz of central Ubud.

On the walk, I had a conversation with a Swedish traveler who had worked as a chef before quitting in February. I was entertained by his travel stories, which included a stint at an Indian ashram and motorbiking through Bali. When we reached the end of the walk, he asked if I had any interest in exploring more of Ubud on his motorbike. If you have spidey senses, your radar justifiably might be pinging, but I didn’t get any weird vibes. Regardless, I wanted to spend some time alone, so I declined his offer. He was totally cool with it and remained as friendly as ever. I was happy about this brief encounter since it embodied everything I love about solo travelers: they don’t judge or get offended if you want to do your own thing.

I purposely skipped a couple of popular activities in Ubud. I’m not a fan of yoga, but many other travelers took classes. The Yoga Barn consistently got good reviews from my yoga-inclined travel mates.

The monkey forest, home to macaques, is another popular attraction. After traveling through Thailand and Malaysia, I adopted a policy of staying away from macaques since they’re often aggressive. If you’re less of a wimp than I am, the forest allows you to see macaques at close range.

One thought on “Bali: Seminyak and Ubud”