I spent three nights in Osaka at the end of September and beginning of October, and took a couple of day trips from the city.

Osaka has “too much” of everything: food, drinks, people, and neon. This is exactly what makes the city so much fun.

I spent most of my time in Dotonbori, which was packed with restaurants and bars. This was probably the equivalent of staying in Times Square in New York (in other words, totally touristy), but I had a great time walking around. I met a couple of travelers in Tokyo who expected more neon in the capital. They should have gone to Osaka: the onslaught of neon in Dotonbori was absurd. 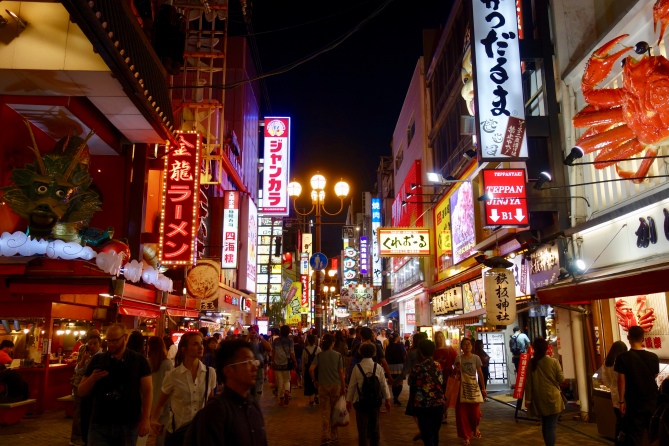 Since Osaka is a foodie mecca, some restaurants display giant animatronic food items. The most famous one is probably the crab in front of Kani Douraku. 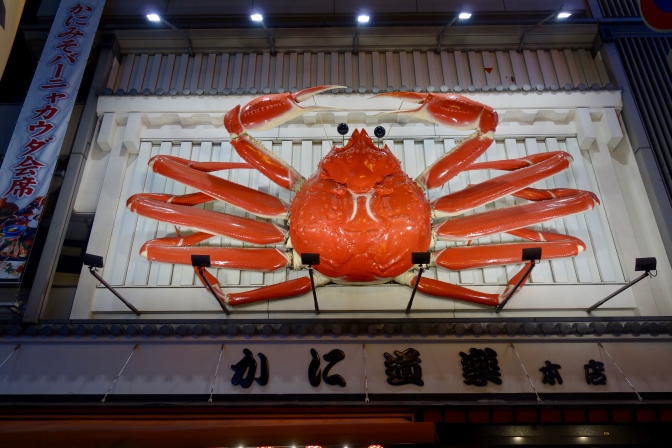 One restaurant had a giant fugu balloon. Travelers like to talk about how one bite of fugu can kill you if the fish isn’t properly prepared. In reality, the chances of dying from consuming fugu prepared in a restaurant are tiny, but it’s a pricey dish–much too expensive for my backpacker budget. 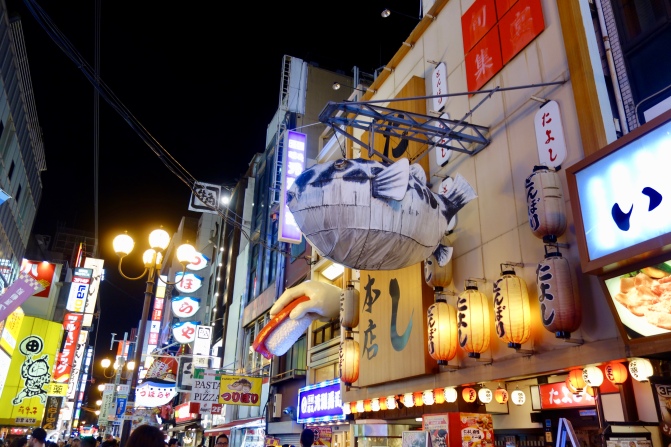 One of the most famous neon signs in Osaka is the Glico Man. I have no idea how it’s become so famous, but it was entertaining to watch everyone go bonkers over the sign. 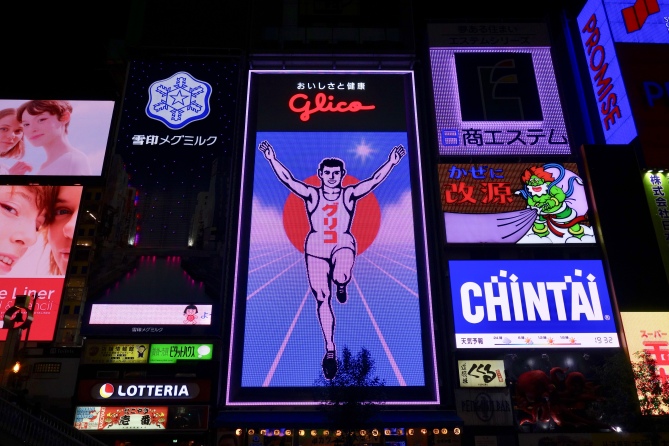 The man, the myth, the legend

Even though I didn’t try fugu, I helped myself to other Osakan specialties. Okonomiyaki is a savory pancake filled with meat, lettuce, and egg. I visited Fukutaro, where guests could watch chefs prepare the pancakes on a cooktop. I ordered pork okonomiyaki, which was drizzled with mayo and a sweet soy-based sauce. 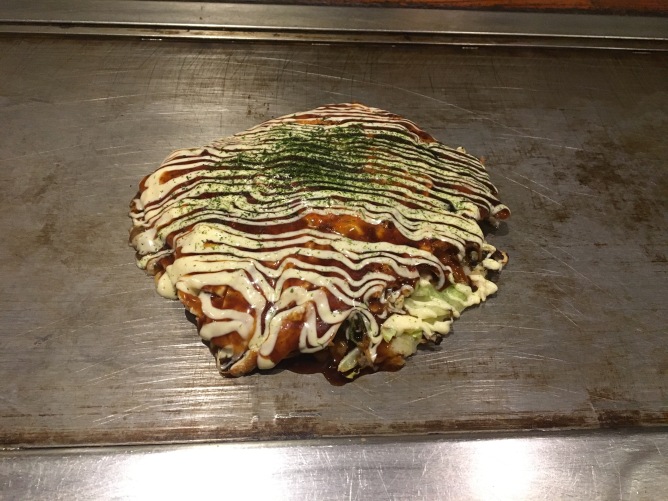 I enjoyed the first half of the okonomiyaki but struggled to finish the second half. This was my fault: I wasn’t hungry when I arrived, and I should have gone to the restaurant when I had more of an appetite. I was glad I tried okonomiyaki, but it was far from my favorite dish in Japan.

In contrast, I loved takoyaki, or battered octopus balls. I had breakfast at Takoyaki Wanaka, where they coated the takoyaki in mayo and bonito flakes. The takoyaki were crispy on the outside and gooey inside. The octopus in the center of each ball was chewy but not rubbery. 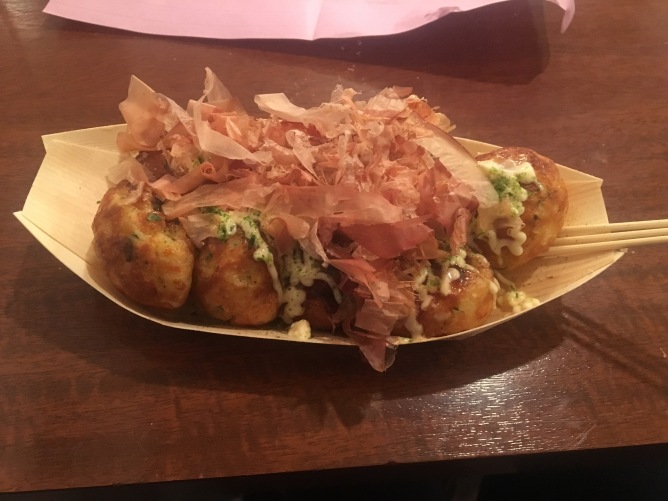 I ate the first couple of takoyaki whole and teared up as they scorched my throat. Since I didn’t want to destroy my esophagus, I checked how locals avoided scalding their tongues. A popular approach was biting into half of a ball, lightly blowing into the center, and then quickly gobbling the second half. I wasn’t deft enough to pull this off, so I just sawed each of my takoyaki in half. The pain was worth it.

As a dessert lover, I tried two restaurants that competed for the best cheesecake in Osaka. I first visited Rikuro Ojisan no Mise, which churns out fresh cakes during the day. Every time I passed the store, there was a line to buy whole cakes. Although I would have loved to buy a whole cake, I didn’t think I’d have been capable of finishing it in one sitting–even I have my limits. I chose to get a single slice at the café upstairs. 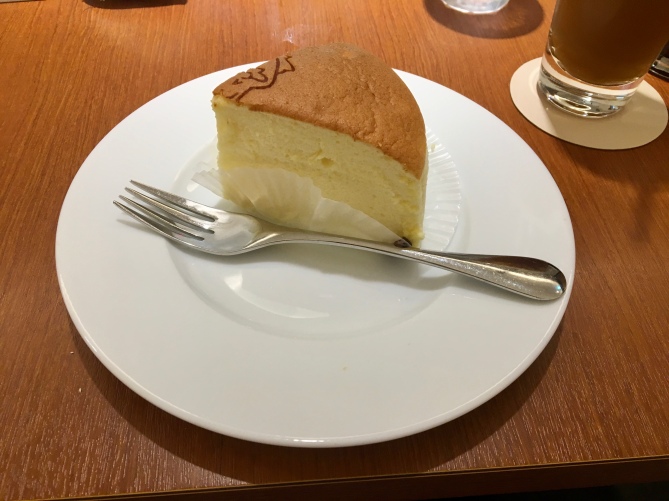 The cake looked more like a soufflé, and it jiggled when I prodded it with my fork. It was a light dessert with a whipped texture, and I liked that the sugar wasn’t overpowering.

I compared Rikuro’s cheesecake to the cheese tart at Pablo. My tart had a pastry crust and came with a scoop of vanilla ice cream. The tart was custardy and had a texture similar to key lime pie. It was sweeter than the cake from Rikuro Ojisan. 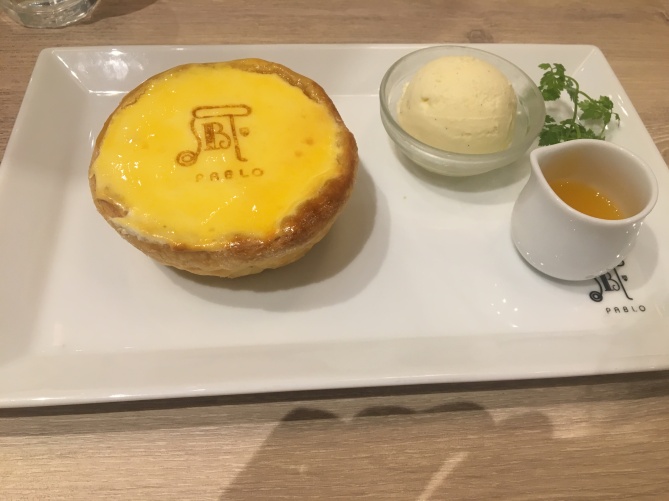 While I would never turn down a tart from Pablo (tart + ice cream = win), I preferred Rikuro Ojisan’s cheesecake.

Overall, Osakans seemed to have a more casual style than Tokyo residents, but they still had a cool sense of fashion. When I was at a bar one night, a local couple was dancing to the side. They weren’t demanding attention, but their synchronized, choreographed steps to the music caught my eye. I liked the couple’s effortless street style, and the girl was wearing an awesome pink baseball hat and sneakers. Basically, I wanted to be her, but I never would have been cool enough to even think about buying her outfit.

As another way to distinguish themselves, Osakans stand on the right side of escalators. This fact alone wouldn’t be weird, but the Japanese drive on the left side of the street, and locals in every other town and city I visited stood on the left side on escalators. Why do Osakans do things differently? Your guess is as good as mine.

Nara, a temple city teeming with deer, is a popular day trip from Osaka and Kyoto. Visitors can buy deer food for 150 JPY (less than $2) from street vendors, and many deer will bow for food. A few even tolerate petting. I wanted to keep my distance, so I didn’t buy food or pet the deer.

Some deer were curious, while others were aggressive and snatched maps from tourists’ hands. 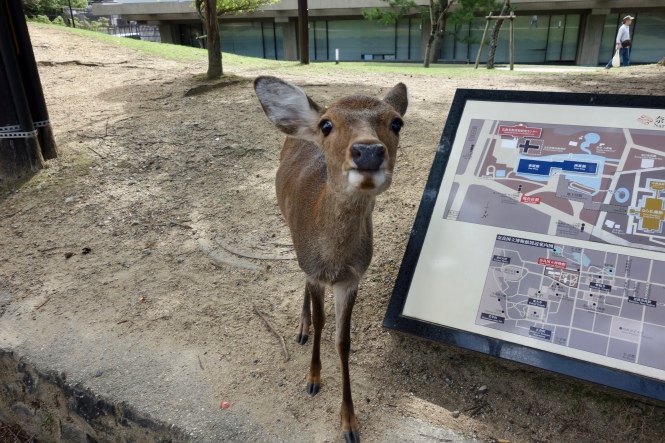 I noticed that Nara had no outdoor trash cans, and I assumed this must have been due to the deer. 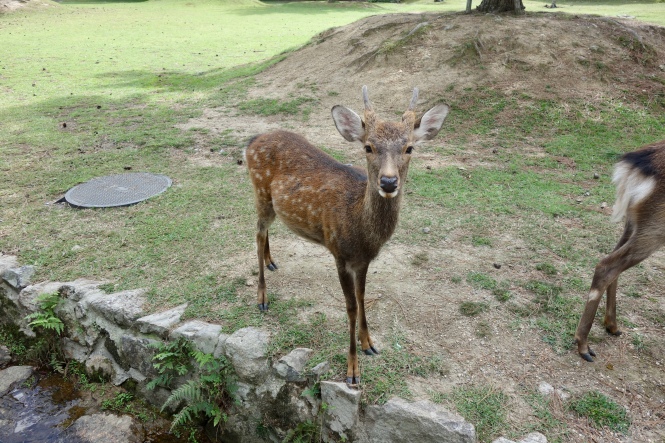 Many of the young deer were shy. I asked another visitor to take a photo of me, and thankfully, she was good-humored and patient. The deer were unimpressed with me and kept skirting away when I tried to pose with them. 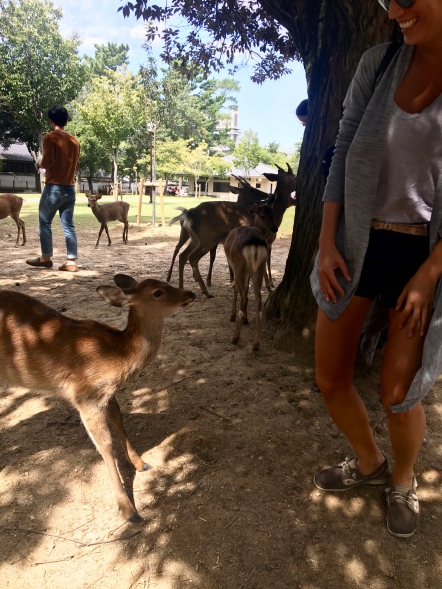 The easiest way to get a photo was to find a deer that was already lying down. 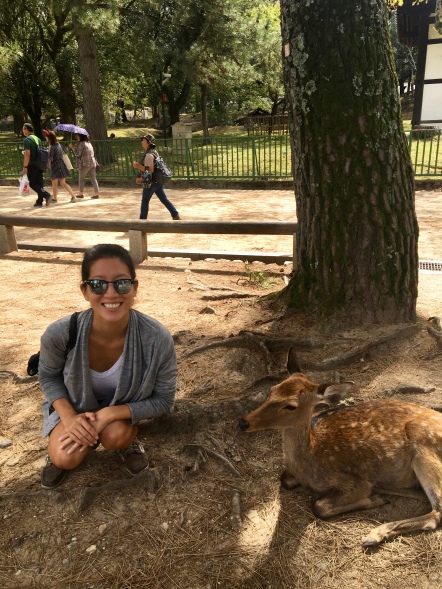 Kasuga Taisha was one of my favorite temples in Nara. Stone lanterns lined the path to the shrine. 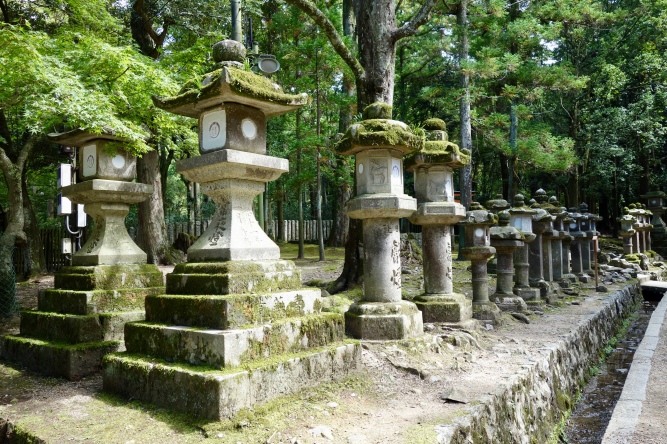 Todai-ji, another temple, is considered an important landmark in Nara, and visitors and deer alike mingled around the entrance. 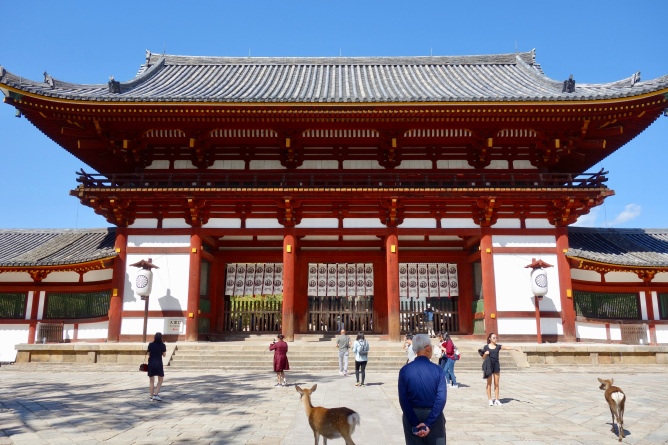 The main hall was huge and is the largest wooden building in the world. It was difficult to capture the scale in photos. 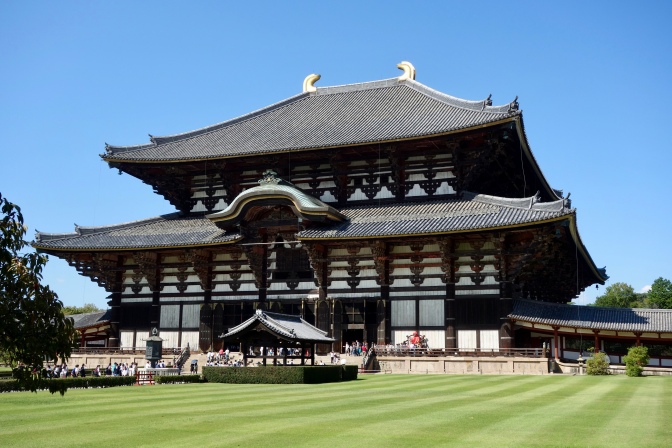 The interior was just as imposing as the exterior. 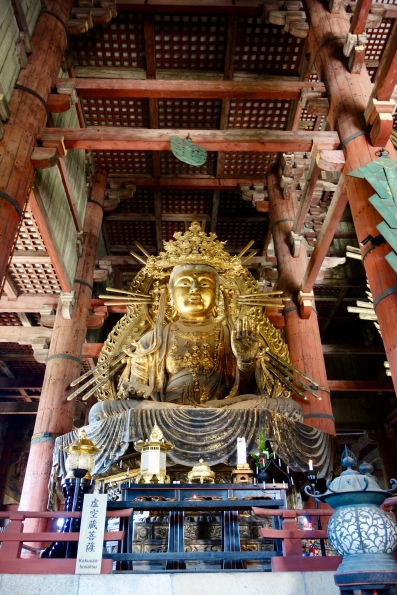 Nara was a 30-minute train ride from Osaka and is roughly the same distance from Kyoto. Most of the major sights were about a 30-minute walk from the train station, so I found Nara to be easily walkable. Visitors can stay in Nara for a night, as there are plenty of accommodations, but a day trip was enough for me.

Koyasan, another temple town, was a priority for me because I wanted to visit Okunoin, a Buddhist cemetery with over 200,000 tombs. I bought a World Heritage ticket in Osaka, which covered the two-hour train ride to and from Koyasan and provided access to public buses.

Once I arrived in Koyasan, I took a bus straight to Okunoin. The two-kilometer walk to the main temple was amazing. It might be strange to call a cemetery beautiful, but it was so peaceful to walk by the graves. 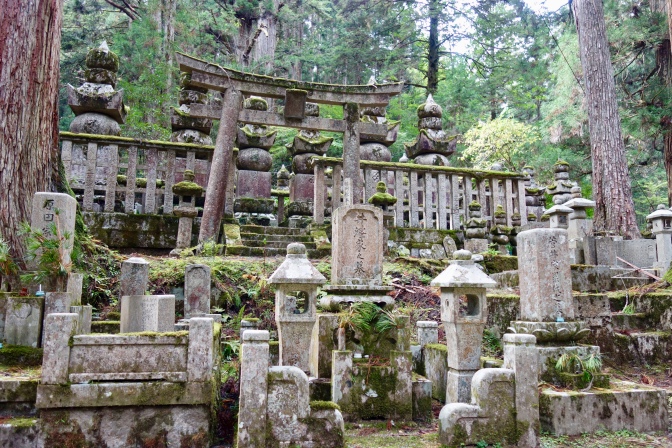 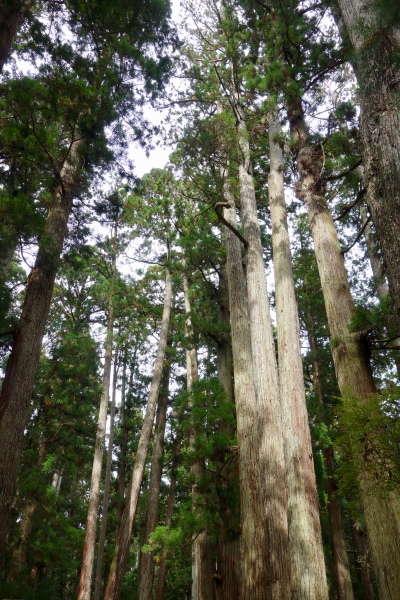 Once I got to the main temple area, I went inside Torodo Hall, which housed more than 10,000 golden lanterns. Photography wasn’t allowed, but it was breathtaking and serene.

Since Koyasan–and Okunoin in particular–is an important religious sight, a number of visitors were making pilgrimages when I was there. It’s possible to spend a night in a temple, although I didn’t get to do this. Parts of Okunoin are lit up at night, so it’s a special experience if you happen to be there. Regardless, I highly recommend spending at least a few hours in Koyasan.