“Really, a blog post about Japanese convenience stores?” you might think. “Is that really necessary?” Yes, it is completely necessary. They are glorious, and I’m going to give them the recognition they deserve.

I went into a convenience store almost every day during my time in Japan, mostly to pick up water and snacks. I can offer one piece of advice, which is mentioned in the Eater article: if you find a snack you like at a particular convenience store, go back to the store and buy more. Each store–even within the same chain–offers different items, and there’s no guarantee you’ll find the same snack again.

While I had most of my meals at sit-down restaurants, I did get one meal at a convenience store. After attending a baseball game in Tokyo, I was hungry but too tired to go to a restaurant. 7-Eleven came to my rescue. I picked up a bowl of udon, which the clerk heated up in a microwave. I felt guilty eating convenience store food, so I quickly snapped a photo of the bowl at my hostel and worked on destroying the evidence.

My source of guilt: a little blurry due to my sneaky attempt to take a photo

I didn’t need to feel so shameful–the udon was a delight. The egg dribbled onto the noodles, which were decently firm. I didn’t detect a lot of salt when I was eating the bowl, but my puffy eyes the next morning indicated otherwise.

One of the best snacks I had was called Cheeza, which I bought on a whim at a Lawson in Nagoya.

When I was in college, I liked to make quesadillas for an easy meal, and I’d purposely press each quesadilla so that cheese would ooze from the edges. After frying for a few seconds, the cheese would form an awesome crust. These Cheeza crackers tasted exactly like quesadilla edges.

After having Cheeza in Nagoya, I looked for it in every convenience store. Tragically, I never found it…until I stopped at a 7-Eleven in Nagano, toward the end of my trip. The 7-Eleven offered two types of Cheeza: blue cheese and cheddar. Without hesitation, I bought both.

After a very scientific and exacting taste test (kidding, I just hoovered both packs), I concluded cheddar was better than blue cheese. I like blue cheese but only in small doses. The blue cheese Cheeza didn’t hold back in flavor, which was overwhelming for me.

Pocky was one snack I was familiar with before visiting Japan, but I discovered new, wonderful flavors thanks to convenience stores. Strawberry Pocky can be found easily in the US, but I had never seen “heartful” Pocky. 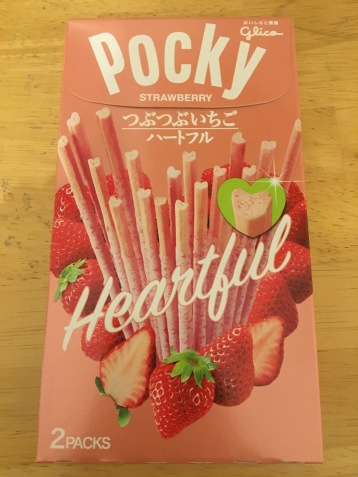 This embodied everything that makes strawberry desserts in Japan so fantastic–it was both tart and sweet. 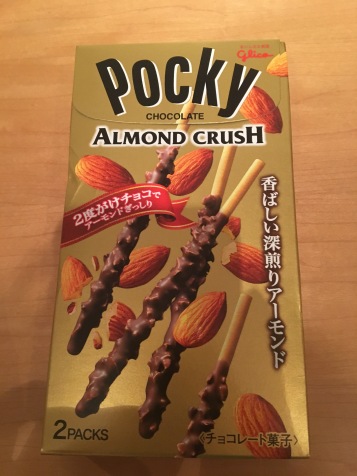 Pocky is crushing the game.

I bought an unassuming cracker from a 7-Eleven in Nagano, thinking it might have a delicious filling. I was right about the filling, but I was wrong about the delicious part; it was filled with red bean. Nope, did not enjoy. As I’ve mentioned before, I don’t like red bean in desserts. I’m showing a photo so other unsuspecting travelers don’t have to suffer like I did.

The ice cream selection at convenience stores is just…wow. I tried a bunch of different ones, and while all were a joy to eat, there were a couple of MVPs. This “waffle sand ice” was from a Lawson in Nagoya (the same store that sold the one and only Cheeza).

The waffle pieces were light and crispy, and chocolate-covered vanilla ice cream is always a winning combination.

At a 7-Eleven in Hiroshima, I bought a “Meiji Sweets” cup, which consisted of strawberry ice cream, a layer of yellow cake, and tart strawberry syrup.

So good–I wouldn’t have expected anything else from a strawberry dessert in Japan. I was happy to find this gem a couple more times after leaving Hiroshima.

One of my convenience store staples was a plain-looking cake from 7-Eleven, which I reliably found across stores in Japan. 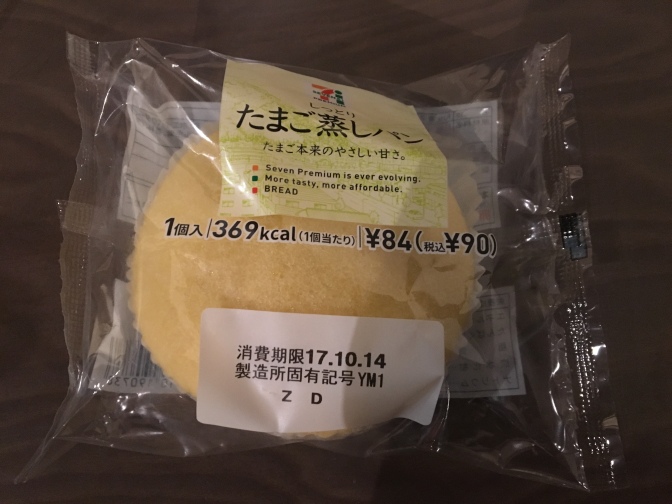 This fluffy, moist cake reminded me so much of Duncan Hines’s classic yellow cake mix. Nothing beats nostalgia.

Part of the fun of convenience stores was combing through the shelves to find snacks that looked appetizing. It was a gamble that didn’t always pay off (see, e.g., red bean dessert), but some of the most modest-looking snacks ended up being the tastiest (see, e.g., 7-Eleven yellow cake).

One thought on “Japanese convenience stores”