Cusco is undeniably touristy. You can’t walk five steps around the Plaza de Armas without being brandished with a tour brochure or a restaurant or spa menu. Enterprising women stroll through the streets with llamas, waiting for squealing tourists to pounce for a selfie. But Cusco is a must for even the most independent and jaded travelers, as it contains an incredible number of sights.

During my first couple of days in Cusco, I walked around the center to get my bearings. Many churches were illuminated at night. 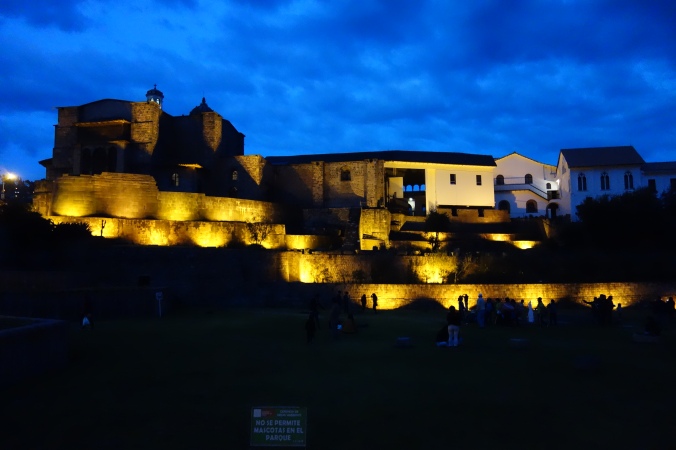 I quickly learned to skirt around the Plaza de Armas to avoid swarms of vendors. I spent more time in the hilly San Blas neighborhood, which contained dozens of cafes and restaurants. A few vendors were scattered in the area, but it didn’t feel nearly as overwhelming as the plaza. 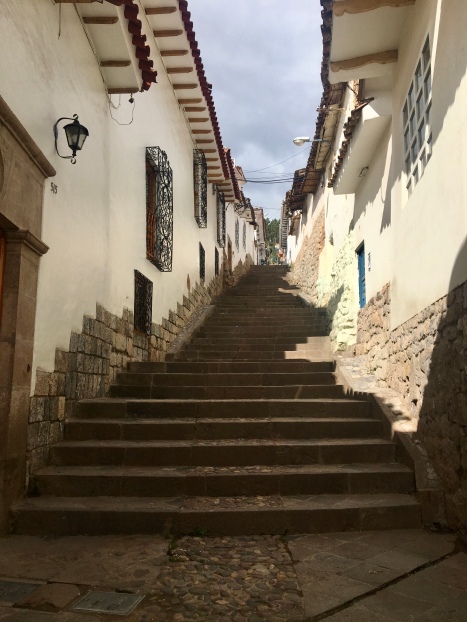 Tons of of day tours from Cusco are available, and I’d bet a good amount of money that you could go on a different tour every day for months. One of the most popular options is the Sacred Valley, which consists of a group of Inca settlements about 1.5 hours from Cusco. I went on a tour with Southern Adventure Peru, and one of our first stops was Pisac. The ruins included large terraces that lined the hillside.

We later stopped at Ollantaytambo, another Inca settlement and a common start and/or end point for Machu Picchu treks.

If you have a free day in Cusco, it’s worth taking a trip to the Sacred Valley. The ruins are remarkable and easily accessible, as long as you’re willing to sit in a bus or van for a few hours.

Vinicunca, or Rainbow Mountain, is another popular day trip from Cusco. If you’re a late riser, beware: you’ll have to get up before dawn no matter which tour company you choose. Some of the more expensive options ($100+ per person) have a 2 AM wakeup call to ensure the group will be among the first to reach the peak. The less expensive options finish hotel and hostel pickups at around 4:30 to 5 AM and then start the three-hour drive to the mountain.

I booked an 80 PEN (~$25) tour through my hostel and was picked up at around 4:45 AM. Now, let’s get a couple of things straight about Rainbow Mountain:

A few people in my tour group paid extra to ride horses up the mountain, but I was determined to make it to the summit by foot. The beginning of the hike was flat and easy. The trail gradually got steeper, but it only slightly slowed my pace. 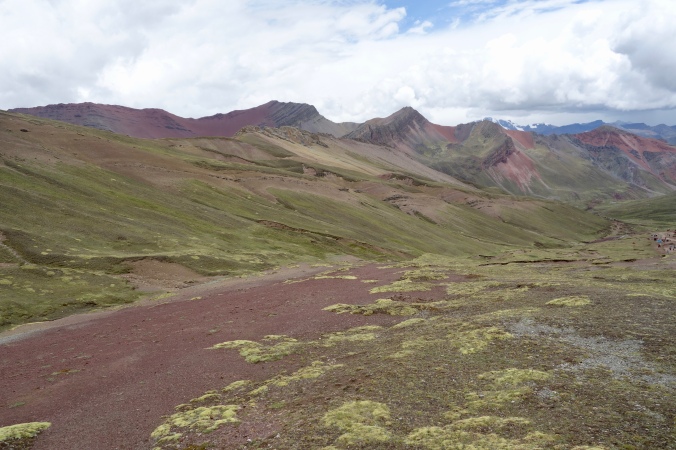 Looking down from the trail

About an hour into the hike, I noticed that I could…not…breathe. Inhaling became a chore, and I had to stop every five minutes to gulp for oxygen. Locals passing by with horses saw that I was struggling and kept asking, “Caballo? 20 soles?” I dismissed them with a feeble, “No, gracias.” I didn’t voice my thoughts, which were more like, “Why are you tempting me? Why? Whyyyy?!”

The climb itself wasn’t challenging, but my progress was slow due to the lack of air at 5,000+ meters. During the last 200 meters, I stopped every 30 seconds just to suck air into my lungs. Nothing other than pure stubbornness was motivating me at this point.

Finally, after two hours of wheezing, I made it to the summit.

The colors of the terrain were gorgeous. Although the sky was overcast, we still had a good view of the valley surrounding the mountain. 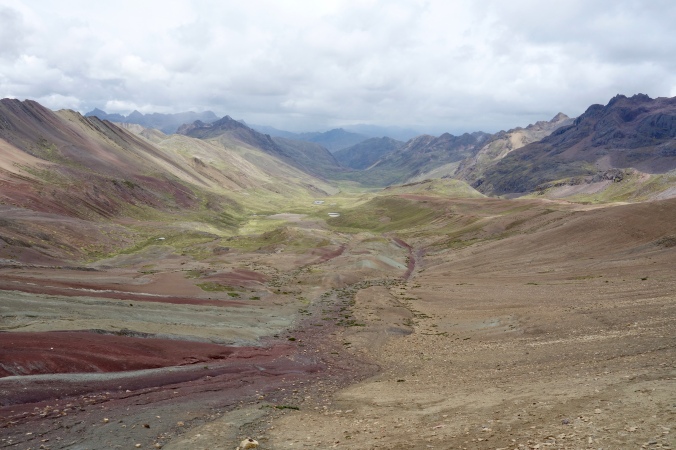 Thankfully, the descent was a lot easier, and I could power walk. Speed came in handy, as it hailed, snowed, and rained for the entire walk downhill. The unpredictable weather in the afternoon at Rainbow Mountain is a big reason why tours leave early from Cusco. I was armed with a rain jacket, poncho (you read that right: a rain jacket and poncho), and thick wool gloves, but I was still soaked by the time I reached the bottom of mountain.

If you’re not a wimp like I am, it’s possible to finish the climb in less than two hours. Other travelers reported that they made it to the summit in 1.5 hours. Show-offs. 😉