For a couple of nights, I stayed in Taganga, a small fishing village on the northern coast of Colombia. I feel guilty saying this, but my stay was two nights too long. Taganga isn’t very scenic and doesn’t have much for visitors to do or see. Although the village has a beach, it isn’t conducive to lounging or swimming. 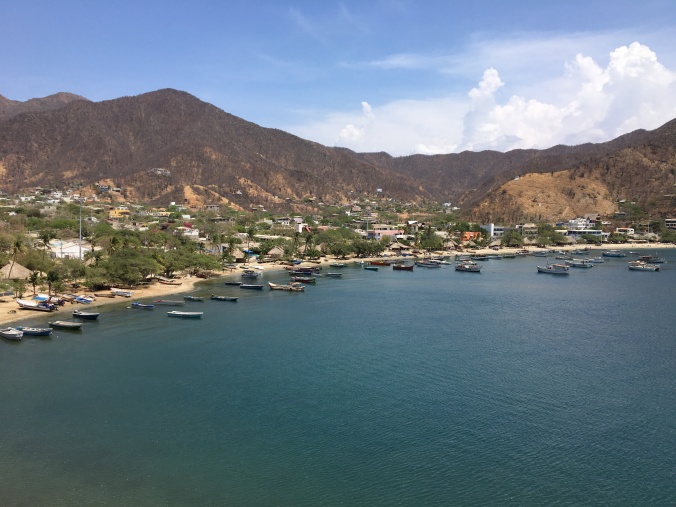 When I was figuring out where I wanted to go in Colombia, a few people tried to deter me from visiting Taganga, but I didn’t listen. (You would’ve thought that almost a year of travel would have taught me to listen to wiser people’s advice, but I am stubborn to a fault.) In a surprise to no one, I ended up wishing I had followed the advice I was given; I spent my stay in Taganga counting down the time until I would be out of there.

My main reason for staying in Taganga was its accessibility to Parque Nacional Natural Tayrona. Taganga is about an hourlong van ride from Tayrona, and the park is also accessible by boat. Instead of Taganga, I should have used the city of Santa Marta as a base to get to Tayrona. Santa Marta is only a 20-minute drive from Taganga, so it’s just as easy to get from there to Tayrona. Santa Marta isn’t particularly scenic either, but it’s a lot larger and has more for visitors. (More about Santa Marta later in this post.)

I left my large backpack at my accommodation in Taganga and brought just my daypack for my one-night stay in Tayrona. I planned to do a little hiking in the park, so I kept my daypack as light as possible.

Upon arriving in the park and paying the entrance fee (44,500 COP or about $15.50), I began the short 9 Piedras hike, which was on the eastern side of the park. The sky was overcast, but I was grateful for no rain.

The time estimate for the trail was an hour, but a British hiking mate and I managed to finish it in 45 minutes with a couple of photo stops.

My hiking mate and I then walked west, which is where the more popular sights and accommodations are. We passed by the quiet beaches Playa Arenilla and La Piscina, where some visitors were swimming.

Playa Arenilla. (NB: this photo and the next few were from my second day in Tayrona, which was a lot sunnier than my first day. The sunlight made a huge difference.) 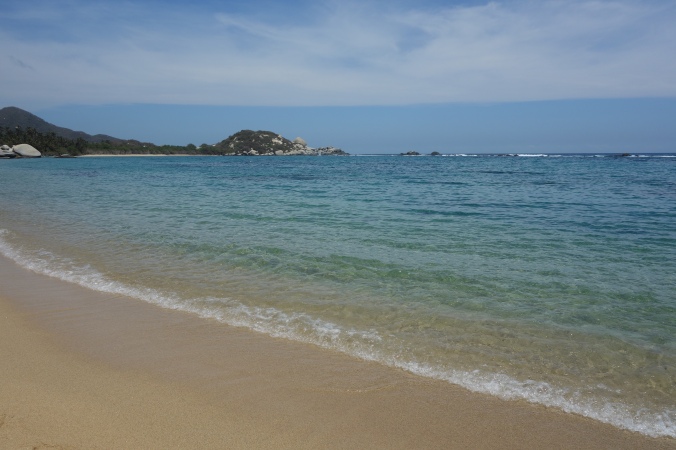 Fruit, juice, arepa, bread, and other food stalls were close to the beaches, so I was able to grab refreshments and snacks.

I also visited Cabo San Juan, a beach on the western side of the park. 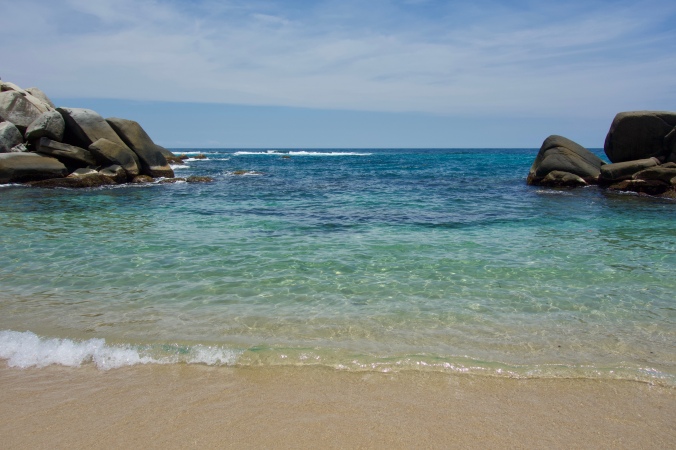 Cabo San Juan is justifiably famous (I mean, just look at that water), but all the hype meant that it was the most crowded part of the park.

Trust me, there were crowds at Cabo San Juan.

To the west of Cabo San Juan is Playa Nudista, which—as the name suggests—is a nudist beach.

Swimming at Playa Nudista is prohibited due to the rough current, but a couple of people were sunbathing. I averted my eyes and just zipped up and down the beach to check out the water.

I purposely kept my camera pointed toward the water the whole time I was at Playa Nudista.

The main accommodation options at Tayrona are hammocks, tents, and ecohabs. For those who want to sleep in a proper bed, ecohabs are the best option. They may be basic, but as the “fanciest” accommodation option in Tayrona, they come a premium. Even if I could have shelled over the money for an ecohab, I would have opted for a hammock instead, as I have an unhealthy fixation with hammocks.

Cabo San Juan is a popular spot to overnight in Tayrona due to its location on the beach, but I had heard the beachside hammocks there could get chilly and windy at night. I reserved a hammock at the Arrecifes campsite instead, which was farther inland. (Tents were also an option at Arrecifes, but I wasn’t going to stay in a tent when I could live the dream of sleeping in a hammock.) 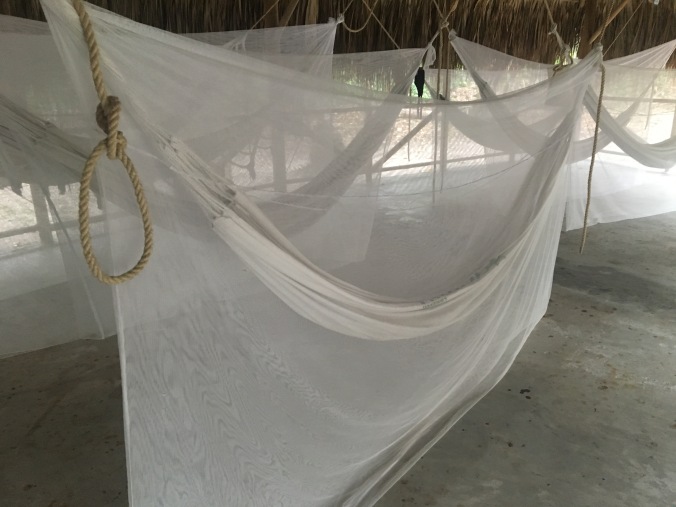 I was happy with my choice; the hammocks and tents at Arrecifes were more spaced out than those at Cabo San Juan. I was assigned a locker to store my belongings, and the showers were clean and modern. I wore a fleece and leggings at night and had no problem with the temperature.

Understandably, dining options in the park are limited at night, so I ate at the Arrecifes restaurant. I didn’t expect outstanding service, but I did expect overpriced food—and the restaurant delivered. I wasn’t disappointed, though, since I knew this would be the price I had to pay by not lugging food around in my daypack.

Although I didn’t get to say that I slept on the beach, I could hear waves in the distance from my hammock when people were quiet; it was an awesome way to be lulled to sleep.

After Tayrona, I stayed in the city of Santa Marta for three nights. I visited La Quinta de San Pedro Alejandrino, where Simon Bolivar died. 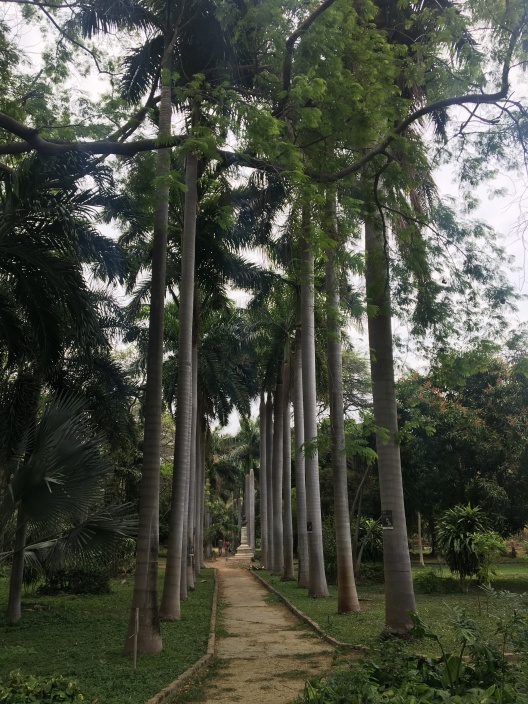 I adore arepas, and I could subsist on the beef arepa at Lulo as my sole source of nourishment. 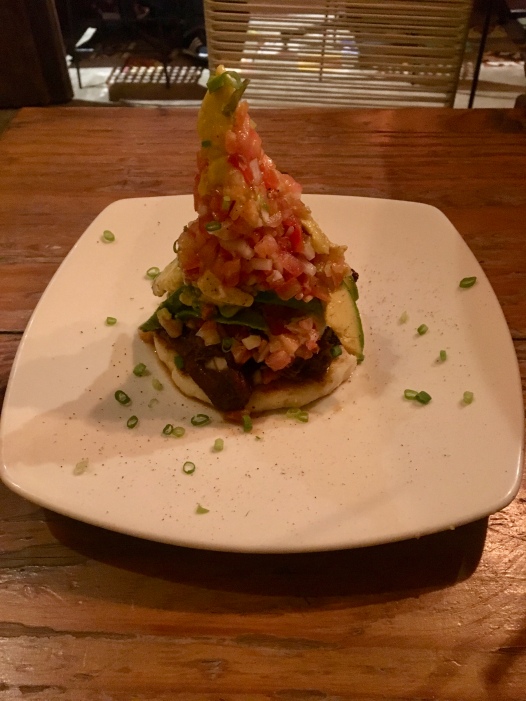 The most divine tower of food

The arepa and limonada de coco were so good that I went to Lulo a second time to get the exact same order.

Unlike Taganga, Minca—a town tucked in a forest teeming with coffee plantations—was a destination that Colombians and travelers enthusiastically recommended. Minca is just a 50-minute colectivo ride from Santa Marta, so I visited as a day trip. However, backpackers—particularly those with a hippie bent—love staying here. If you’re looking for a quieter and more charming alternative to Santa Marta, Minca is where you want to be.

After a colectivo dropped me off in the center of Minca, I got a moto to La Victoria, a coffee plantation on the forest hillside. Tours (15,000 COP or about $5) were offered in Spanish and English and covered the intricacies of coffee cultivation. At La Victoria, coffee was picked by hand, and the beans were transported through an ingenious maze of pipes and sorted by water-powered machines. Free cups of coffee were included at the beginning and end of the tour.

After the tour, I walked back to the center of Minca. The downhill walk took two hours with a couple of stops; it was an easy walk, but you can just take a moto back to the town center if you don’t want to hoof it. Not many vehicles or pedestrians passed by me, so I could hear birds calling in the forest. I had my poncho on because of a light drizzle, but trees provided additional protection from the rain.

Drizzly walk back to the town center 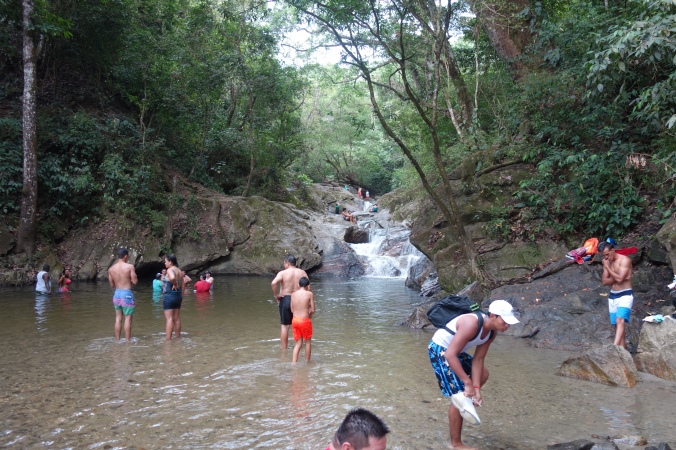 Not pictured: the tons of people surrounding me as I took this photo.

I just took a couple of photos and immediately returned to the road.

Once I returned to the center of Minca, I waited for a colectivo back to Santa Marta and saw a cluster of backpackers with instruments nearby. They began an impromptu jam session because…#backpackerlife, of course. I thought I had seen my fair share of travel clichés, but one of the backpackers did something completely unexpected: instead of a guitar (typical backpacker stereotype), he broke out an honest-to-God trombone. If I had any doubts before, this just confirmed that Minca fit the bill of being a hippie haven.