Penang is a state in northwestern Malaysia that’s famous for its food. I spent three nights in the capital of Georgetown.

A good portion of my days was devoted to hunting for street art, which is spread throughout Georgetown. I had a map that identified the more famous works but spotted plenty of others that weren’t on the map. Sometimes I’d see people who seemed to be gathering around nothing noteworthy. It was only when I turned around or looked up that I realized they were taking photos of street art.

Many of the works incorporated a three-dimensional element. 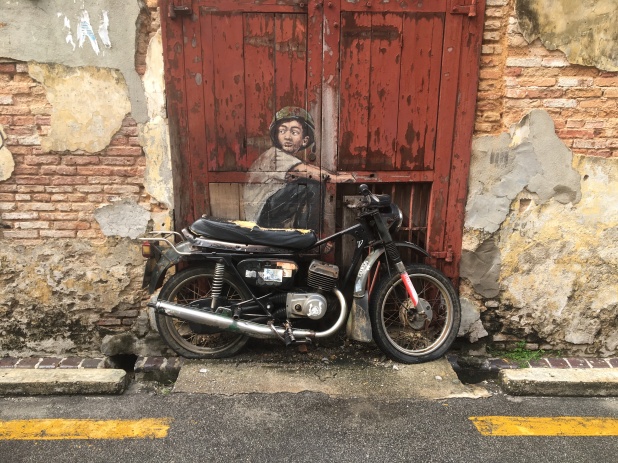 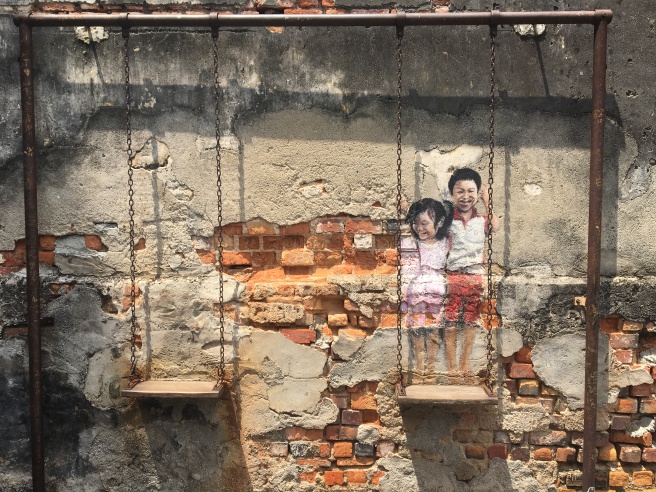 A number of works provided historical facts about streets and other locations in Georgetown. 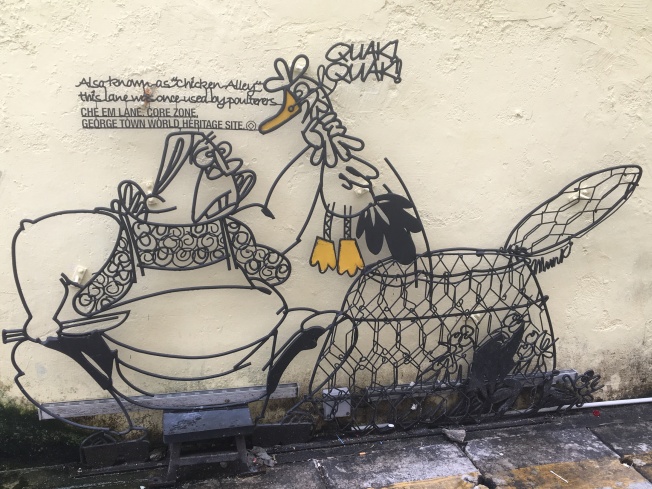 In case the text is difficult to read, this work explains why a lane in Georgetown is also known as “Chicken Alley.”

I visited the Tropical Spice Garden one afternoon, which was an hourlong bus ride away from the center of Georgetown. The staff sprayed each guest with citronella, which served as natural insect repellent. The admission fee included an audio guide that provided a wealth of information about the spices in the garden. 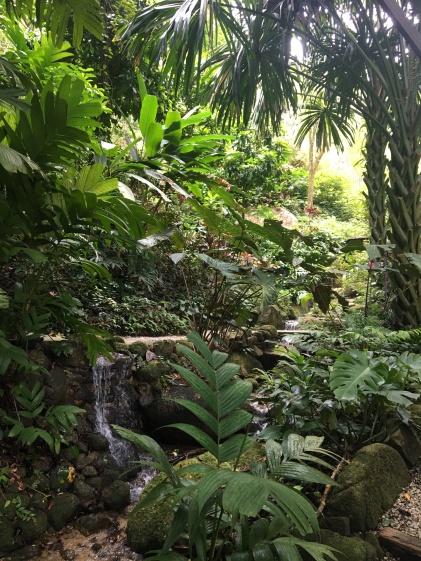 My favorite feature of the garden was a large wooden swing. The garden wasn’t crowded, so I spent a few minutes enjoying the breeze in peace. 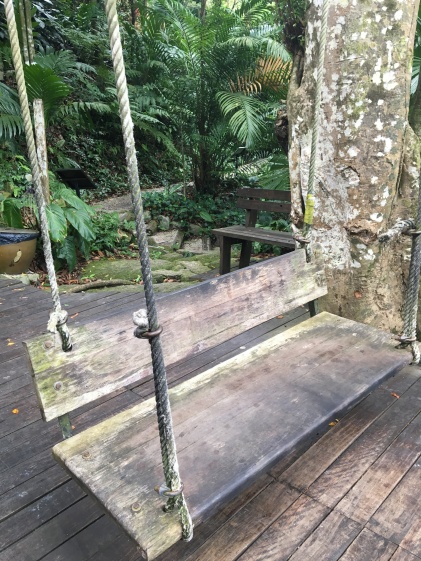 A small, picturesque beach was across from the spice garden. Only a couple of people were laying out on the beach.

On another afternoon, I visited Kek Lok Si, the largest Buddhist temple in Malaysia. The incline of the hill on which the temple sat magnified the size of the complex. Part of the temple was under construction, but it was still a workout to climb the hill.

A tortoise pond was at the bottom of the complex, which was fun to watch.

The food in Georgetown lived up to the hype. On my first night, my roommates and I tried lok lok, which consisted of a selection of food items on skewers. We were free to take any skewers we liked and place them into pots of boiling water. The lok lok cart owner advised us how long we should keep each skewer in the water. You can dip the cooked food in a spicy dipping sauce before eating. The cost depends on the type of skewers you choose; I think the most expensive item was 2 MYR (about 50 cents). It was a cheap and tasty way to try an assortment of items.

I craved noodles in Georgetown and visited Yeap Noodles every day of my stay. I ordered the same thing each time: dry pork noodles and fried wontons. I get that variety is the spice of life, but once I find something I like, I’m perfectly content to eat it every day.

If you’re a backpacker, you’ll probably end up having drinks at a hostel called Tipsy Tiger. I didn’t stay there, but my roommates and I visited one night. As expected for a party hostel, the crowd was largely 18- to 24-year-olds, but we still had fun starting the night there. Tipsy Tiger is close to Love Lane, which is a popular spot to go out due to its high concentration of bars. Lebuh Chulia is a nearby street that also houses plenty of bars and restaurants.

A German traveler recommended that I visit the tourist information center in Georgetown. I normally don’t go to information centers, but the one in Georgetown was fantastic. A staff member gave me maps identifying attractions and restaurants and a sheet with events being held during the week. She provided tips on how to visit sights outside of the city center and information on public transport. It’s a great way to get oriented and plan your visit in Georgetown.