Before I came to Indonesia, other travelers recommended that I spend just one night in Jakarta or skip it altogether. I brushed off these recommendations, thinking Jakarta must have had some appeal due to its status as the capital city.

I don’t know why I thought I knew better; I should have listened to everyone else. While I didn’t care for a couple of cities I visited earlier in my trip (e.g., Nha Trang and Phuket), Jakarta was the first destination I actively disliked. The traffic was terrible, and there weren’t many sights to visit.

I might have been hypersensitive, but I felt uneasy while walking through the city. Many men stare at foreign women, particularly those in short sleeves. I had been the target of curious looks in other countries (although non-Asian travelers certainly received more stares than I did), so the mere fact that people were looking at me wasn’t the problem. The stares in Jakarta felt different – more obvious and less benign. Covering shoulders and knees helped, but it didn’t eliminate the issue. I do think travelers should consider local customs and dress accordingly, but it was still uncomfortable to walk around.

Thank goodness for the staff at Capsule Hotel, or else Jakarta would have been a bust. The staff were lovely and answered all my questions. They led an inexpensive city tour that covered all transport and entrance fees. They also hung out with guests after hours and provided recommendations on places to eat and drink.

The one sight I enjoyed in Jakarta was Istiqlal Mosque, the largest mosque in southeast Asia. This was one of the sights on Capsule’s city tour and was worth a visit, especially considering Jakarta’s predominantly Muslim population.

Yogyakarta, a mid-sized city about a 7.5-hour train ride from Jakarta, was a welcome escape. Yogya, which is on the island of Java, felt more relaxed and friendlier than Jakarta. Both locals and travelers dress conservatively, so it’s a good idea to wear clothes that cover your shoulders and knees.

Temples were my priority in Yogya. I decided to go to Borobudur, a Buddhist temple, at sunrise. I had seen a couple of travel specials featuring Borobudur when I was younger, so I was excited to finally see the temple in person.

It was drizzling on the morning of my visit. After I shelled out the cash for the entrance fee (450,000 IDR or about $34), I entered the temple complex and put on my rain jacket. I huddled with other travelers who were waiting for the sun to peek out from the clouds.

We waited in vain: the drizzle continued, and the sky remained overcast. Although the horizon slowly lightened, we didn’t get any glimpse of the sunrise. The drizzle morphed into a downpour, and many people retreated to their tour buses and vans. I sought refuge under an archway. I knew no one could control the weather – hello, we’re dealing with Southeast Asia, where weather forecasts are useless – but I was still disappointed. “This is [insert expletive here],” I thought. “I waited years for this?”

As I was debating whether to admit defeat, a staff member handed out free ponchos. I gladly took one since it provided more coverage than my rain jacket. Armed with my bright green poncho, I was willing to wait for the rain to subside. After about 15 minutes, the downpour lightened back to a drizzle, and I was able to start exploring the temple.

The temple is laid out so that visitors can follow a path starting from the bottom and work their way to the top. For no real reason, I started at the top and worked my way down. The top is adorned with stupas and a dome.

The carvings on the lower levels are fascinating. I didn’t have a guide, so I didn’t have insight into the meaning of each relief, but I still spent a couple of hours admiring the intricate detail. 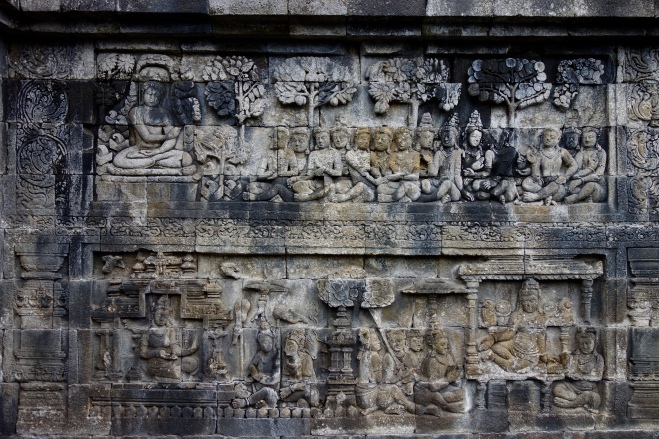 Finally, at the bottom, I was able to appreciate the grand scale of the temple. The clouds were also starting to clear.

Even with the rain, I’m grateful I got to visit Borobudur. 450,000 IDR is a steep entrance fee for sunrise, but the post-sunrise entrance fee is cheaper (325,000 IDR or about $24). Since I didn’t see a sunrise, I’m not sure if it’s worth the extra $10 over regular admission. However, one benefit of early admission was that the temple was less crowded than I expected. Then again, the downpour might have contributed to the lack of crowds.

On another day, I visited Prambanan, a Hindu temple. I loved the view of the temple after entering the complex.

Prambanan isn’t as large as temple complexes like Angkor Wat in Cambodia, but it felt more intimate. I took my time while strolling through the buildings. 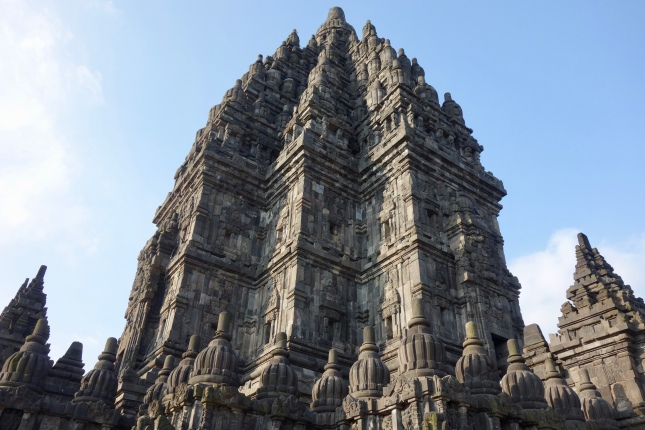 A lot of school groups were at Prambanan on the afternoon I visited, and they were eager to take photos with travelers. Non-Asian travelers (especially babies, children, blondes, and/or redheads) seem to be the most popular subjects in Southeast Asia, but even I had been asked for a few photos in Vietnam and Malaysia. A couple of groups asked me for selfies at Prambanan, and I cracked up when each group member demanded a separate photo; a group photo wouldn’t suffice. Kids!

The regular entrance fee for Prambanan is 325,000 IDR/$24, but you can get a discounted admission of 195,000 IDR/$15 if you present a student ID. My Cornell student ID contains a photo of me from my senior year of high school (yikes), but it was still accepted. You can also buy a combined ticket to Borobudur (post-sunrise admission only) and Prambanan for 520,000 IDR/$39. It’s easy to take the Transjogja public bus from Yogya to Prambanan, which cost only 3,500 IDR (about $0.25) for a one-way ticket.