I spent three nights in Hiroshima in the beginning of October and took a day trip to the nearby island of Miyajima.

A visit to Hiroshima would be incomplete without learning more about the bombing in World War II. I first visited the A-Bomb Dome, one of the few buildings left standing after the blast.

The cenotaph was a memorial for the bombing victims with a view of the dome through the center. 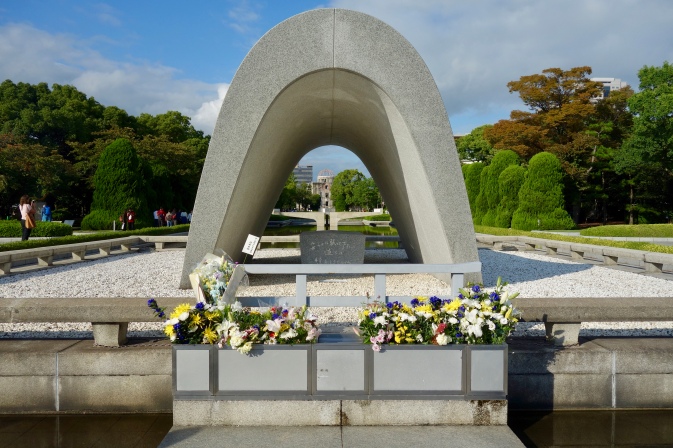 The Children’s Peace Monument honored a young girl who contracted leukemia after being exposed to radiation from the explosion. She folded paper cranes in an effort to speed up her recovery, but unfortunately passed away from her illness. Today, people send thousands of paper cranes to be incorporated into the monument. A crane-shaped bell hung from the center of the monument, and it was so moving to watch toddlers and young children ring it. 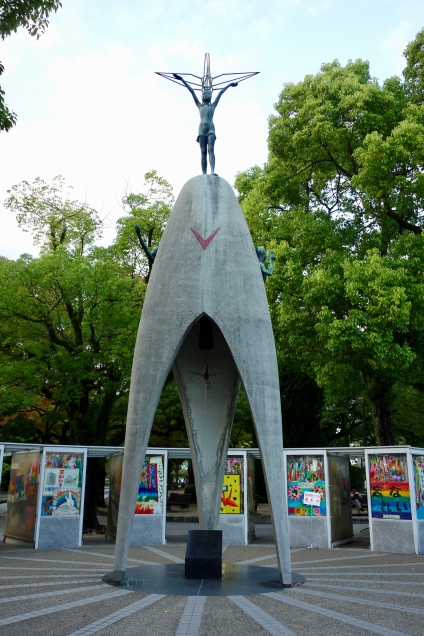 The Peace Memorial Museum was solemn and informative. I was surprised by how even-handed and fact-based the exhibits were in detailing President Truman’s decision to drop the bomb on Hiroshima. Video testimonials and photographs of bombing victims were harrowing. It was impossible to ignore the tragic and extensive effects of the bomb. The museum also discussed current measures to dismantle nuclear weapons.

Of course, I thought the bombing was horrible when discussing it in history classes, but it seemed like an abstract and distant event. Visiting the park and museum made the tragedy more concrete, and they are absolute musts during a visit to Hiroshima.

While my visit to Hiroshima involved serious reflection, there were also plenty of moments of joy. A friend who is a diehard American baseball fan recommended attending a Hiroshima Carp game. While Japanese baseball fans are generally known for their enthusiastic support, Carp fans take it to another level. Sadly, I visited Hiroshima after the regular season ended, so I was unable to watch a game. However, the Carp fandom still made its presence known as I walked through the city. Carp posters and souvenir stores were everywhere. I also happened to catch a parade of Carp fans celebrating the team’s Central League pennant.

As for food, Hiroshima has its own version of okonomiyaki. Since I didn’t love the Osakan version, I decided to skip the dish and stuck to my reliable favorites.

Just a couple of blocks from my hostel was Nokiya, an udon shop. On the afternoon I arrived in Hiroshima, I ordered a cold udon set with tempura. The tempura was piping hot–so hot that I burned the roof of my mouth. I didn’t care; the tempura (which included eggplant, potato, and pepper) was crispy, while the noodles were thick and firm.

I was so pleased with my meal that I returned the next day. I would have returned the following day as well, but the shop was closed.

To get my noodle fix on the day Nokiya was closed, I visited Ita Soba Kaoriya in downtown Hiroshima. After I placed my order for cold soba with mushroom tempura, I received a bowl of tiny, slightly salty, crunchy, round nuggets. I had no idea what these were, but they were the kind of snack I could easily eat a whole bag of. When my main meal arrived, I was excited to have a large portion of chilled soba. The mushroom tempura was a great accompaniment.

Note the peanut acting as a cute chopstick stand.

I visited Ita Soba Kaoriya on my last night in Hiroshima. If I had discovered it earlier, I would have visited multiple times. (Imma creature of habit.)

I visited Miyajima on a Sunday, which might not have been the best choice. Since it was a weekend, the island was packed with both domestic and foreign visitors.

The iconic sight in Miyajima is the “floating” torii, or orange gate. I arrived at Miyajima at 10:30 AM, around high tide.

The torii around high tide

Many visitors consider high tide the best time to see the gate. However, low tide also has its appeal, as visitors can walk to the torii.

Itsukushima Shrine faces the torii and also appears to float on water at high tide. The line to enter the shrine was over an hour long, so I settled for taking photos of the exterior. 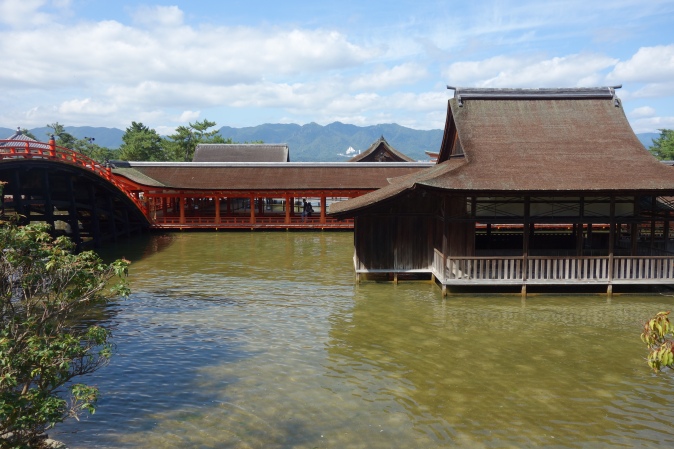 Miyajima has three trails to Mount Misen, the highest peak on the island. A ropeway to the peak is available for travelers who don’t want to hike for two hours. On the day I visited, the wait for the ropeway to Mount Misen was over an hour. I decided to follow a couple of shorter nature trails instead, which offered an escape from the crowds. 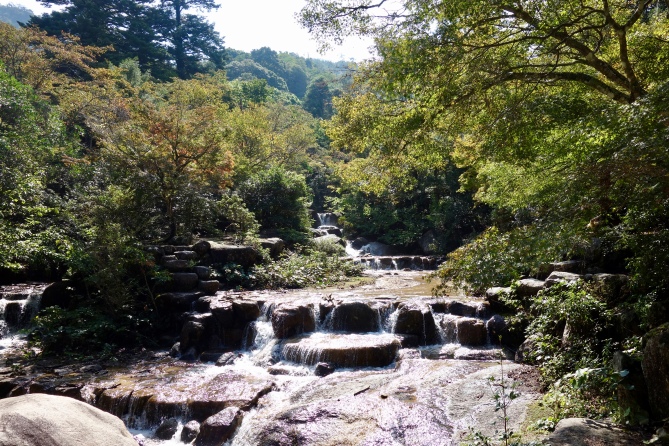 Like in Nara, deer roam free on Miyajima. Some visitors pet the deer, but I decided to be cautious; I saw a couple of deer chasing terrified children.

Momiji manju, or maple leaf-shaped pastries, are sold everywhere on Miyajima. The most popular flavor was red bean. Since I don’t enjoy red bean in desserts, I opted for a chocolate-filled pastry, which was totally the right choice (for me). It was like a pain au chocolat–10/10, would eat again. A deer spotted me wolfing down my momiji manju and tried to steal the second half of my dessert. I managed to scoot away with my momiji manju intact.

While I was grateful for the chance to visit Miyajima, I couldn’t fully enjoy my visit due to the massive number of people on the island. For visitors looking for a quieter experience, Miyajima is supposed to be beautiful and peaceful for an overnight stay. A weekday visit might also be a better option for fewer crowds.