When travelers say a location is “just like any other big city,” chances are good that I’ll end up liking it. Maybe I like to be contrarian. Maybe I arrive in the city with low expectations. Whatever the reason, it’s just how things have worked. I’d met a few locals and travelers who said Santiago “wasn’t anything special,” but–sure enough–I enjoyed my stay there.

Now that I’ve been doing this travel thing for a few months, I’ve adopted a more relaxed pace in cities. I don’t have a “mustdoeverything somanyplacessolittletime hurryupletsgonow likeseriouslyvamos” mindset anymore. I wake up and figure out what I want to do: visit sights, chill in cafes, find good eats, and hit up a bar or two (mind you, this happens a lot less now that I’m in my late–like, a day shy of 30–20s). Santiago might not have a ton of tourist attractions, but it was great for a relaxed visit.

Santiago offers a lot of opportunities to up your step count, such as Cerro de Santa Lucia, a hill next to the tiny, bohemian-chic neighborhood of Lastarria. The walk to the viewpoint at the top of the hill wasn’t demanding; it probably would have taken about 15 minutes without any stops. I wasn’t trying to break any records to get to the top, though (it would be a record in itself if I attempted anything more than a power walk), so I took time to appreciate some of the lovely gardens.

At the bottom of the hill was Fuente de Neptuno (Neptune’s Fountain).

Cerro de San Cristobal was a larger hill in the bar-heavy Bellavista neighborhood. You can take a funicular up and down the hill, but I chose to walk. It was an easy (but sweaty) 35-minute climb–easy enough for me to do in boat shoes.

It was slightly hazy on the day I visited, but the hilltop offered panoramic views of the city.

Santiago has a number of parks and plazas, which become lively at night with musicians and dancers. I visited Parque Arauco, which was next to a mall sharing the same name. 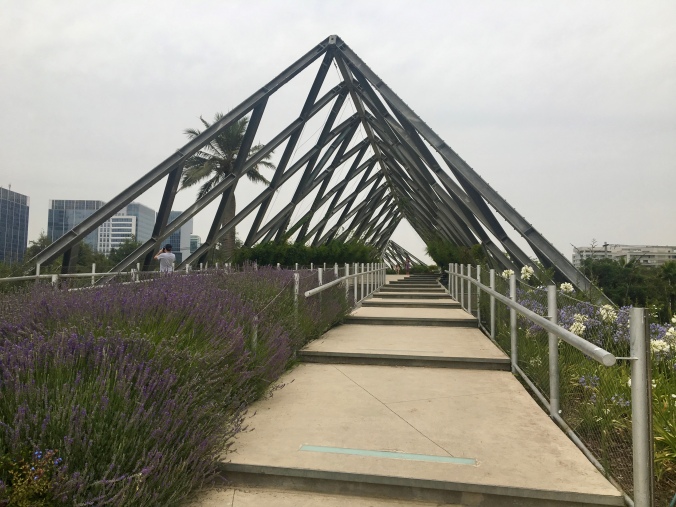 Both Chile and Peru claim to be the home of pisco. When I was in Peru, I didn’t dare mention Chile and pisco in the same sentence. I followed a similar tactic in Chile by not mentioning Peruvian pisco…until I visited Chipe Libre in Santiago. Chipe Libre serves Chilean and Peruvian piscos and offers flights for visitors interested in comparing the two. I didn’t want to be peeled off the floor of the bar at the end of the night, so I settled for a cocktail with passionfruit (yes) and pineapple (more yes) juice.

Oh yeah, the pope also visited Santiago while I was there. NBD.

In contrast to Santiago, a lot of travelers hyped up Valparaiso, a colorful harbor city reachable by a 1.5-hour bus ride. 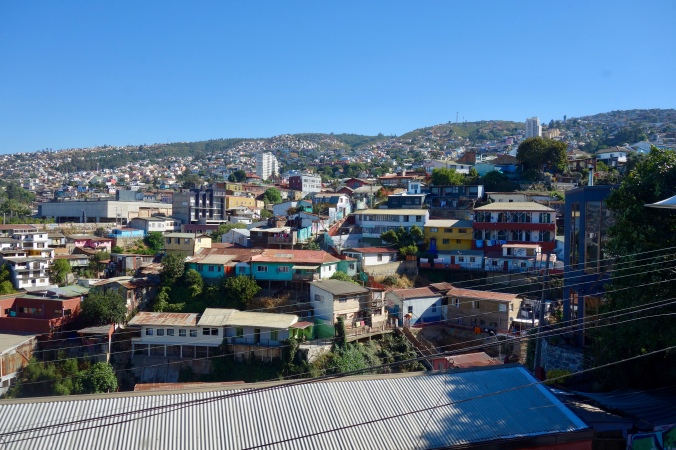 The city is set on a few hills, which means a lot of stair climbing. A few small elevators are scattered throughout Valparaiso, but I didn’t mind walking.

Valparaiso is covered in street art, and I spotted a number of Instagrammers taking “casual” posed shots. 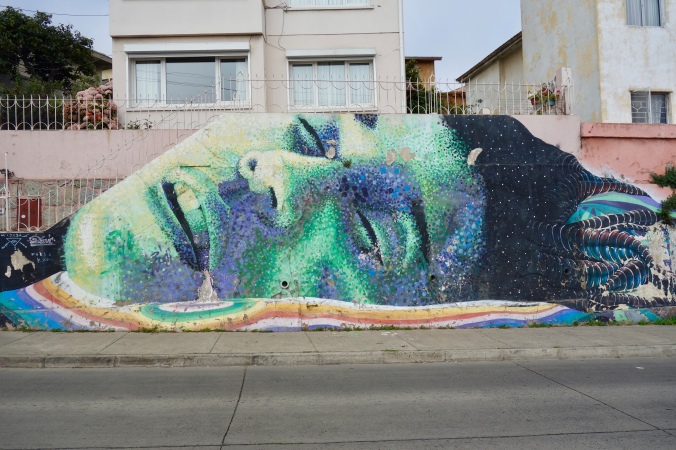 The poet Pablo Neruda had a home in Valparaiso, which he called La Sebastiana. Neruda loved to entertain, and his house had a lot of quirky features, like a bathroom with holes in the door. (I have no idea who would be brave enough to use it.) No photos were allowed inside La Sebastiana, but the house had great views of the hillside.

I know I can’t do anything about this, but that tree blocking the house really bothers me when I look at this photo.

Of course, since we were in Valparaiso, there had to be street art featuring Neruda.

I liked Valparaiso, but my stay was slightly too long. I spent four nights in the city, but I would have been perfectly fine spending just two or three nights there. I did meet some travelers who adored Valparaiso and spent more than a week there, so YMMV. If you want to get out of Valparaiso, the beachside city of Viña del Mar is just a 40-minute bus or metro ride away. While Valparaiso is known for being artsy and a little gritty, Viña del Mar is more of a luxury, “corporate” weekend destination for Santiago residents.