Pucón is a cute, touristy town nestled between lakes and volcanos. It’s a popular spot for vacationing Chileans, and its center happens to contain a grocery store called Eltit (cue 11-year-old giggling).

I didn’t know how many activities Pucón offered until I arrived at my hostel Chili Kiwi. I met a guest who had stayed in Pucón for two weeks and still hadn’t done everything he wanted. The staff hosted a daily welcome briefing, where they described options for hiking, kayaking, canyoning, skydiving, and hydrospeeding (basically barreling down a river on a kayak-boogie board hybrid). The briefing lasted over an hour, but I didn’t get bored because everything sounded cool.

My first activity was walking to Salto El Claro, a waterfall about two hours from the town center. The waterfall is Pucón’s not-so-secret secret, so chances are good that you’ll see other visitors there, even though it’s tricky to reach. My hostel provided detailed instructions to get to El Claro, including a hand-drawn map.

About an hour into the walk, a Russian guy on a motorbike stopped and asked if I wanted a ride. Sketch, right? (Let me be clear: the random offer for a ride was sketchy, not the fact that the guy was Russian.)

Normally, I wouldn’t have acknowledged the driver. However, hitchhiking is relatively common for backpackers in Chile, and the staff at my hostel had mentioned that passing drivers might offer rides. I never thought I’d even consider entering a stranger’s car–hello, Stranger Danger 101–but a couple of things were in my favor:

So, yeah, I hopped onto the back of a stranger’s motorbike. Sorry, Mom.

During the 10-minute ride, I learned that my driver had been traveling since 2011 and had been based most recently in Santiago. He had strong feelings about my country’s president (I can’t say I disagreed with him). His rant lasted for almost the whole ride, at the end of which I offered him a handful of pesos. He declined, waving me off and pointing to the area of the woods I had to enter to reach the waterfall.

This was where my hostel’s map came in handy: according to the map, I had to take 110 steps to a specific tree and then turn right to reach a path to the waterfall. I ended up taking about 130 steps–I’m a dork, so I counted out loud–before reaching the tree. I still took the wrong path a couple of times, but I could hear the roar of the waterfall, which eventually led me the right way. 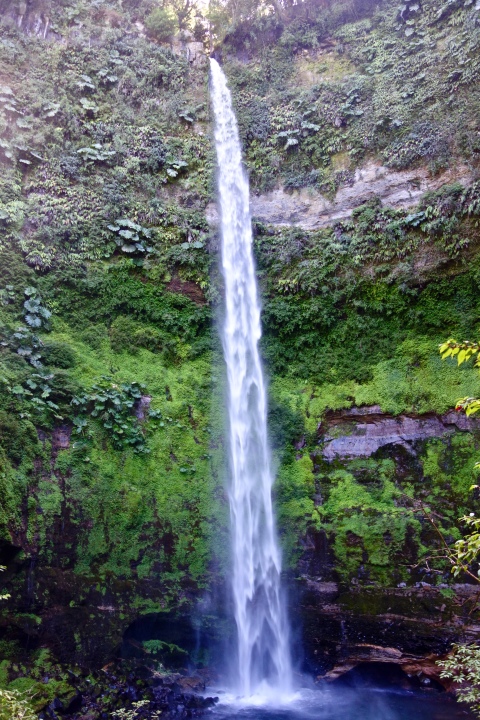 The waterfall was taller than I’d expected, and the cool mist was refreshing. I stayed for about 20 minutes and started heading back to town. After about an hour, the Russian guy motored by me again, offering me a ride to the main road. The ride saved me no more than 15 minutes of walking, but I just wanted to flaunt my newly acquired hitchhiking skills.

Huerquehue, a national park about an hour from the center of Pucón, is one of the main attractions in the area. Even now, I have no idea how to pronounce the name, so I settled for calling it “el parque.”

Huerquehue has several hiking trails, and fit backpackers go for the strenuous San Sebastián hike, which provides a view of lakes, volcanos, and mountains. I was planning on hiking up a volcano later during my stay in Pucón (more on that below), so I thought it would be a good idea to save my energy.

I chose the more moderate Los Lagos trail, which bordered three lakes. The first was Lago Chico, which was still enough to act as a (blurry) mirror of the surrounding trees and hills.

The second was Lago Verde, the least memorable lake. It was nice – don’t get me wrong. But “nice” doesn’t really cut it when you’re in Chile’s beautiful Lake District.

On the bright side, the lake had a couple of small beaches where hikers could take a lunch break.

Lago Toro was the last lake on the trail, and it was my favorite, as it was bordered by tall, steep hills.

The Los Lagos trail was harder than I expected. I thought it would be a leisurely stroll, but the two-hour walk to Lago Chico was almost all uphill. I didn’t mind much since the trails were quiet, and there were 20-minute stretches where I didn’t see any other hikers. In fact, it was so quiet that I spotted lots of salamanders scuttling over leaves.

One of the main reasons I visited Pucón was to hike up Volcán Villarrica, an active volcano that last erupted in 2015. You’re supposed to get breathtaking views at the peak, and you get to slide down the mountain on a sled. Sounds great; sign me up!

There’s a catch, though: the volcano serves as a ski slope in the winter. You’re climbing up a black diamond run to get to the peak.

I don’t know about you, but I don’t hike for the exercise. I know physical activity is good for you, blah blah blah. Anything more strenuous than a flat walk, though? Nope. Hate it. It sucks. My tshirt starts dotting with sweat at even the slightest incline. The people who claim they “love to sweat” are total liars. They don’t exist.

I hike solely for the beautiful views. I have no intention of breaking records. I just want to see pretty things and maybe take a couple of photos.

I signed up for a hike up Villarrica with Antü and was picked up by the owner Joaquín at 6:00 AM. Two other people were in our group: a 21-year-old German guy who had completed civil service and a 25-year-old Israeli guy who had served in the army for five years. Guess who was the weakest link in the group?

For 10,000 CLP (~$15), hikers can ride a chairlift up part of the slope, which shaves off about an hour of hiking time. I was so ready to take the chairlift since I had heard the first part of the hike wasn’t scenic anyway. My hiking buddies, however, had grand ambitions to walk the whole way up. What’s an exercise-averse girl to do? I walked. (Bitter? Me? No way.)

Antü did a great job of providing us all the gear we needed: boots, helmets, jackets, pants, buffs…and an ice pick. I probably shouldn’t be trusted with a 1.5-foot-long spiked object, but Joaquín showed us how to use it to stabilize ourselves as we climbed. This lesson was particularly useful for me, as I slipped constantly. My groupmates, on the other hand, were pros and had no problem bounding up the mountain.

As we made our way up the volcano, we were able to see its shadow in the clouds.

If I had been the only one hiking, I would have stopped to take breaks every 20 minutes…at least. Instead, we stopped about two hours into the hike, and only because I had to gasp for a short break. 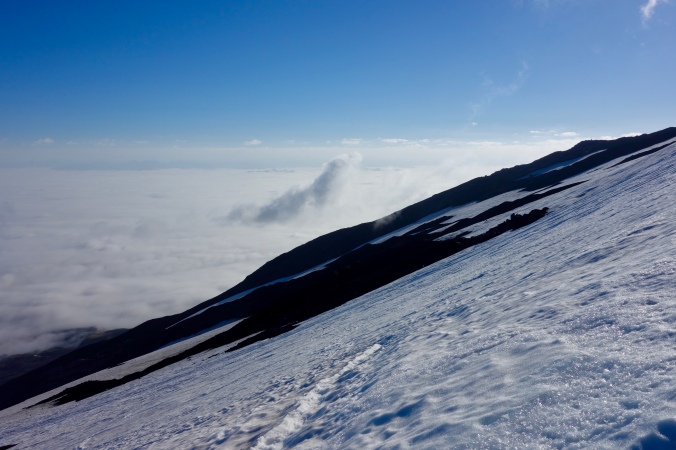 I could have spent the rest of the day catching my breath, but everyone was ready to go after I finished inhaling a banana.

When booking a Villarrica hike, tour operators emphasize the importance of clear weather. I had been tracking the weather before I arrived in Pucón and throughout my stay and booked the sunniest day a couple of days beforehand. The forecast predicted clear skies and a high in the 70s.

So much for planning. Although the day started out sunny, mist enveloped the mountain as our group inched closer to the summit. The wind picked up, and I struggled to find my footing on the rocks. When we reached the peak, we got a view of a whole lotta cloud.

Our group reached the summit in three hours and 15 minutes. Joaquín said most groups finished in about four to five hours. I believe it; I would have finished in six hours if it hadn’t been for my hardy hiking buddies. Without me, they could have arrived at the summit 30 minutes quicker.

After taking photos of different shades of gray (no, I’m not going to refer to a terribly written trilogy-turned-movie series), we started our descent. Once we got back to snow, we plopped onto hard plastic sheets and slid down tracks in the mountain. It was like backpacker bobsledding. I was terrified at first and used my ice pick to slow down but soon got comfortable enough to relax my death grip.

Villarrica wasn’t all that I’d hoped since the summit was misty, but I’d been on the road long enough to know that even the most careful plans could be thrown for a loop. I did get more exercise than I’d bargained for (thanks, groupmates!), so it wasn’t a total waste. Our group was well equipped and small, so we were able to get up the mountain more nimbly than the disorganized 20-member groups.

A couple of extra notes about Pucón: