Ho Chi Minh City (HCMC) was my last destination in Vietnam. To get there, I booked a daytime bus through Wolfpack Hostel, my accommodation in Dalat. The bus was operated by Futabus/Phuong Trang, one of the more reliable bus companies in Vietnam. Buses from Dalat to HCMC take six to eight hours (with the last one leaving at around 11:00 PM) and depart every hour. My bus ride was uneventful, especially compared to my sleeper bus experience from Hoi An to Nha Trang. A minivan picked me up from my hostel to take me to the bus station, and attendants made sure I got on the right bus. The bus departed from Dalat at noon and arrived in HCMC at around 7:00 PM.

On my first full day in HCMC, I visited the War Remnants Museum, which featured photographs and war memorabilia. I thought an exhibit on photographers from the Vietnam War was especially interesting. I had never seriously thought about the risks that war photographers faced before visiting the museum. The museum also featured grim photographs of warfare, Agent Orange victims, and torture of POWs. It was a sobering perspective of the Vietnam War. 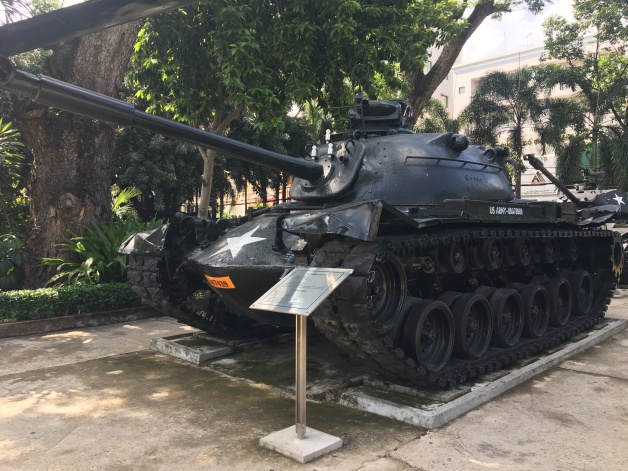 Tank from the War Remnants Museum

I also walked by sights such as the post office and Ho Chi Minh Square. I admit that I visited the post office mainly because it was an attraction listed on TripAdvisor. A couple of my roommates from my hostel made fun of me for visiting it, but the exterior looked nice. It resembled a train station rather than a post office. I didn’t think the interior was special, but I might have gotten more insight if I had gone with a tour guide. 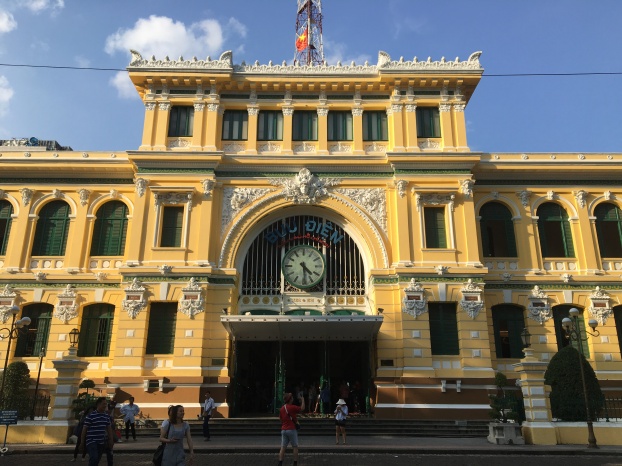 Uncle Ho. I visited the square in the late afternoon, so this photo is backlit.

Many travelers visit the Mekong Delta when they stay in HCMC, but I planned to skip it since I had cruised the Mekong in Laos in 2013. Instead, I decided to take a tour of the Cu Chi Tunnels, which were used by the Viet Cong during the Vietnam War. I booked the tour with Vietnam Adventures.

Lesson learned: triple check your tour with your guide. Since I was spending two full days in HCMC, the Vietnam Adventures office asked if I could remain on the Mekong Delta tour and pay a discounted price. I could then go to the Cu Chi Tunnels the next day. I initially wasn’t pleased about this arrangement since I had no real desire to go to the Mekong again. I agreed anyway since I didn’t want to delay the rest of the group.

The Mekong Delta tour ended up being fun, and I let go of my initial reservations. Fa was a great guide. For one of our stops, we rowed through a coconut village, which was similar to my countryside tour in Hoi An. 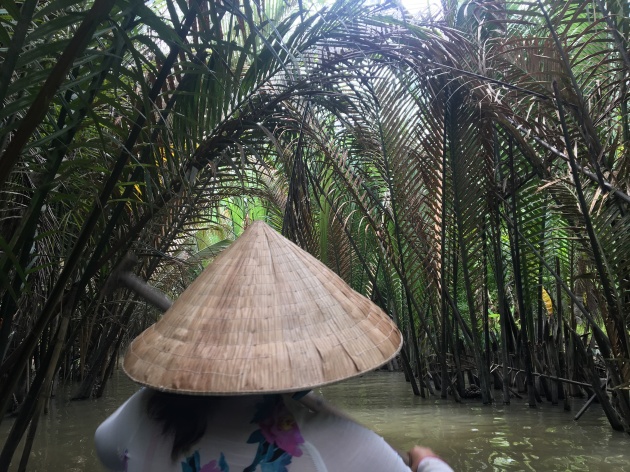 We also had several stops for samples of local fruit, chocolate, and coconut candy. The most interesting food stop was for royal jelly, a substance made by worker bees to sustain the queen bee. It supposedly contains a lot of vitamins and minerals and is claimed to improve skin tone, reduce signs of aging, and increase lifespan. I don’t know about the truth of any of these claims, but I enjoyed my sample of royal jelly. Bees loved it as well, as they swarmed around the employees who were preparing our samples. Crunchy honey-flavored bananas and oats accompanied our royal jelly samples. 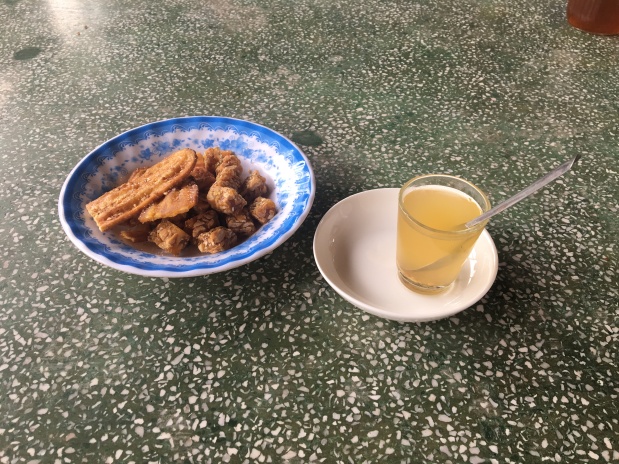 The next day, I went on my long-awaited tour of the Cu Chi Tunnels. The Viet Cong were able to camouflage the entrances to the tunnels under foliage. We got to try hiding inside a tunnel entrance. Based on this experience, I can confidently say that I’ll never be agile enough to be a Viet Cong soldier.

The Viet Cong also built traps for Americans who managed to find the tunnels. One of the traps was a swinging door that opened to foot-long nails below.

We could also walk through a reconstruction of the tunnels. These reconstructed versions were designed to be larger than the original tunnels to accommodate tourists. There were three exits, so people could choose to leave earlier if they couldn’t make it to the end. I could barely make it to the first exit, which was probably less than 20 meters from the entrance. I’m 5’6 and not particularly large, but I had to hunch over and bend my knees during the whole walk. I’m going to have to do some squats to prepare for the tunnels if I go there again.

A few other notes about HCMC:

I’ll have one final recap of my travels in Vietnam and then will start writing about Thailand. I’m mainly visiting beaches in Thailand, so my experiences have not been as diverse as those from Vietnam. As a result, I’ll have fewer posts relating to Thailand. I hope this will allow me to catch up on blogging!