I’m not a hiking or climbing enthusiast, so I’d never heard of Huaraz before I visited Peru. I don’t remember who first told me about the city, but that person–whoever he or she was–is a saint. I loved so many things about Peru, but Huaraz was the absolute highlight.

I visited Huaraz in early December, the rainy season. Although a number of multi-day treks start from Huaraz, I decided to stick to day trips. I was skittish about the rain and figured it would be easier to deal with it during day treks rather than a multi-day camping trip. If you’re more adventurous than I am, you should seriously think about the multi-day Huayhuash and Santa Cruz treks. If you don’t have your own gear, rental shops are all throughout the city center.

When I arrived in Huaraz, I visited a few tour companies and ended up booking three tours with Quechuandes due to their experience and transparency. Their website contained a wealth of information and was clear about what was and wasn’t included in each tour. Based on my input, the owners David and Maria suggested an itinerary without pressuring me to book anything. They even gave me information about how to do a self-guided, half-day trek, even though they offered the same hike as a tour. Ultimately, I decided to book that half-day tour with Quechuandes, but I was impressed with their honesty.

I can’t believe I forgot the name of my guide for the Wilcacocha trek, but he was superb. If you want to request a guide from Quechuandes, ask for the guide who led the half-day Wilcacocha Lake trek on December 12, 2017. Before we started the hike, my guide made it clear that I could ask to stop at any time. He regularly checked in with me to make sure I was OK. He was a good conversationalist and humored my halting, broken Spanish.

The hike started with a 30-minute uphill but became flatter afterward. I breathed heavily during the initial climb, but the trek was a lot easier than Rainbow Mountain in Cusco. We reached the lake in less than an hour and a half, which my guide claimed was a record. (I didn’t believe him for a second.)

My guide and I were the only people at the lake, so we were able to fully enjoy the tranquil setting and view of the Cordillera Blanca. The only noise came from a few ducks quacking and paddling in the lake.

My guide then led me to another viewpoint of the Cordillera Blanca.

Since I didn’t have any headaches or other serious symptoms during the hike, my guide cleared me for day trips at higher altitude. I was thankful to have “passed” but was even happier to have spent a beautiful day outside with a fantastic guide.

The next day, I went on a full-day tour to Laguna Parón, which was located about three hours from Huaraz. If you’re looking for a less strenuous day trip, Laguna Parón is a great option. The most difficult part of the day was sitting in a van for more than six hours. (But, truth time: I passed out for most of the ride, so it was an excellent trip for me.)

Are the views worth the drive? You be the judge:

If you want a little exercise, you can climb to a viewpoint about 45 minutes from the shore. The climb isn’t too challenging, but you do have to be careful about where you place your feet. The lake is located more than 4,100 meters above sea level, so you might also get winded from the altitude, depending on how acclimatized you are.

If you just want to chill out at Parón, you can take a boat ride or walk on a flat path circling the lake. As I walked on the path, one of my tour mates had fun taking photos of the lake as seen from my sunglasses.

When my group visited Parón, we saw no more than five other visitors at the lake. Our guide explained that Parón isn’t promoted as heavily as other destinations around Huaraz, so you usually don’t have to battle for photos with other tour bus groups.

Laguna 69 is one of the most popular trips from Huaraz. If you want a workout, this is the lake for you. Laguna 69 is about 4,600 meters above sea level, and it takes about three hours to hike to the lake. The altitude can take a real toll if you aren’t acclimatized; some of my tour mates doubled over from headaches and gasped for air during the trek. (No judgment here–I could relate.)

According to my guides, here are some of the differences between Lagunas 69 and Parón:

When guides kept making the point that Laguna 69 was “all about the journey,” I was like, “Uh…OK?” It sounded so new age and cheesy.

Then our group started the hike to Laguna 69. And I got it. 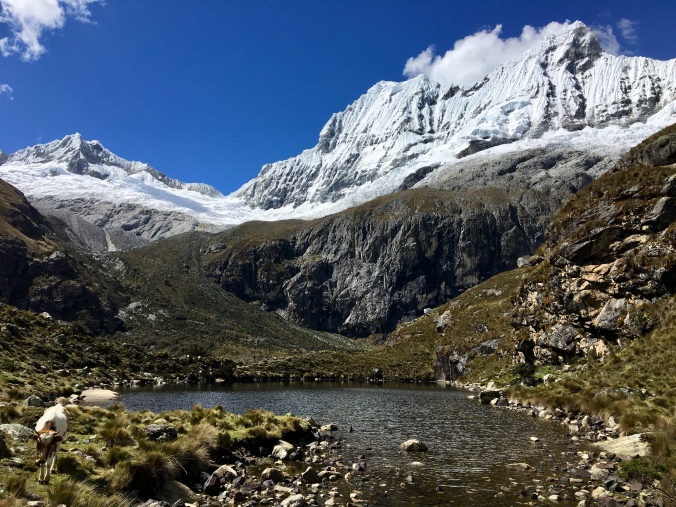 Magnificent scenery greets you at every step of the trail to Laguna 69. I stopped for photos every couple of minutes, taking a dozen shots of the same scene. “Wait, I need to capture this mountain at a slightly different angle!”

I think this was photo #4 of ten similar shots.

To add even more dramatic effect, you don’t actually see Laguna 69 until the last couple of minutes of the hike.

Laguna 69 is popular for a reason. It was unreal.

Although a couple of tour groups were at the lake, it was easy to find a secluded spot to soak in the views. Nothing beats mountain scenery.